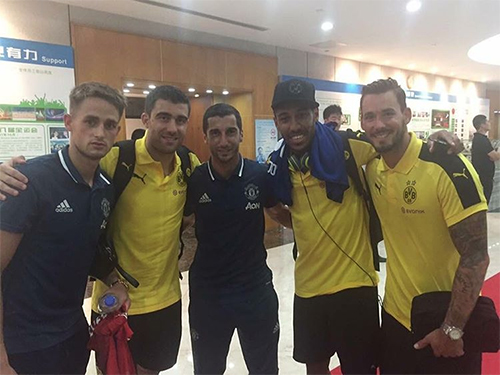 Henrikh Mkhitaryan couldn’t disguise his disappointment at suffering his first defeat as a Manchester United player despite having the chance to catch up with his former Borussia Dortmund team-mates.

The Red Devils suffered their first defeat since Jose Mourinho took over the reins from Louis van Gaal after previously beating Wigan Athletic 2-0 ahead of their trip to China.

The Armenia international was facing his former side Borussia Dortmund just weeks after moving to the 13-time Premier League winners in a £30m deal from the Bundesliga runners-up.

However, United suffered a sobering 4-1 defeat by Thomas Tuchel’s Dortmund side following goals from Pierre-Emerick Aubameyang, Mousa Dembele and Gonzalo Casto in Shangai.

While Mkhitaryan did manage to score what ultimately prove a consolation goal for Mourinho’s side, even his goal couldn’t cheer up the summer signing as he posed with Adnan Januzaj and some of his former Dortmund pals after the game.

Mkhitaryan posted the above photo on his Instagram page and wrote:

“Not happy about the defeat, but we will get stronger! Despite the result it was still good to see my former teammates”

The Red Devils can make amends for their humiliating defeat with victory over Manchester City in their next pre-season game on Monday night.