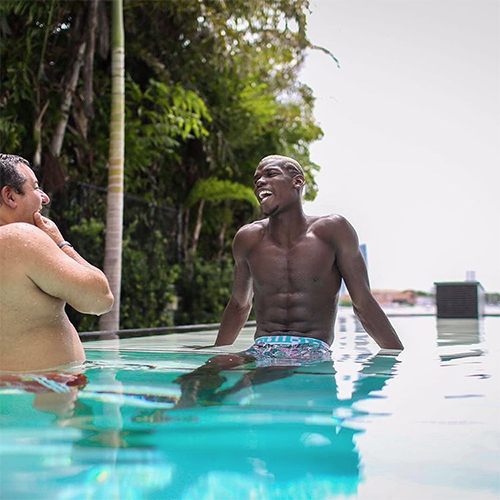 Paul Pogba and his agent Mino Raiola are keeping Manchester United supporters on edge after the Juventus midfielder uploaded one of his most cryptic Instagram update so far.

The Guardian reports that Juventus want United to add an additional £8m to their offer of £92m as the Red Devils look to prise Pogba from the Serie A champions this summer.

Pogba’s agent confirmed that there was no deal in place for the sale of the midfielder last week despite speculation suggesting United were on the brink of finalising the transfer.

And Raiola found time in his busy schedule during the summer transfer window to join his in-demand client in the swimming pool in Miami as Pogba made the most of his break ahead of the 2016/17 campaign.

Pogba posted the above photo on his Instagram page and wrote the following caption:

“We say it all by saying nothing at all #holidays”

The French starlet has won four successive Serie A titles, two Coppa Italias and finished as a Champions League runner-up during a four-year stay in Turin since his move to Juventus from United in 2012.