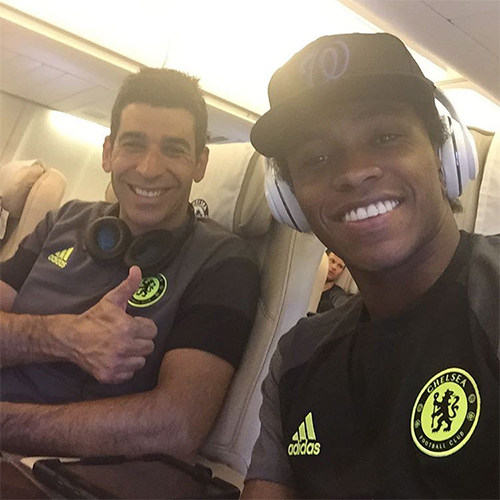 Willian was all smiles with Chelsea coach Marcelo Ribeiro as the Blues headed to Austria for pre-season training on Friday night.

The Brazil international is part of Antonio Conte’s squad for the trip to Europe as the new Chelsea manager puts his players through their paces ahead of the 2016/17 season.

The Italian coach was unveiled to the British media at Stamford Bridge earlier this week after the 46-year-old was appointed as Jose Mourinho’s permanent manager in the spring.

Conte won three successive Serie A titles and the Coppa Italia twice during a four-year spell in charge of Juventus before the retired defender took over the reins of the Italian national team.

And the South American posed for a photo with Chelsea coach Ribeiro ahead of the west London side’s flight to Austria under Conte.

Willian posted the snap on his Instagram page and wrote the following caption:

The Brazilian scored 11 times in 49 games in all competitions for the west Londoners last term.

Willian won the Premier League title and the League Cup in the 2014/15 season.