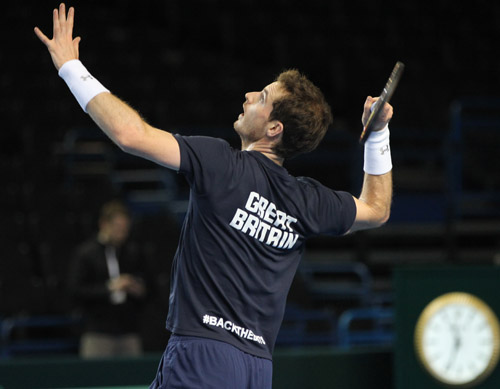 A seven-player squad will represent Great Britain in the Olympic tennis event in Rio in August, it has been confirmed by the International Tennis Federation.

Andy Murray will defend his gold medal performance in London 2012, and is joined in the singles draw by Kyle Edmund, subject to his involvement in the July Davis Cup tie against Serbia.

Murray will also double up with his brother Jamie, who is current world No1 in doubles, in an attempt to win gold in that discipline, too. He will not, however, be able to defend the silver he won in mixed doubles, as his partner Laura Robson, who has missed much of the last three years with chronic wrist injuries, has been unable to fulfil both the ranking and Fed Cup requirements.

World No18 Johanna Konta and No55 Heather Watson will compete in singles and then join forces in women’s doubles too.

As well as men’s defending champion Murray, the women’s gold medallist, Serena Williams, will defend her singles title and is joined by sister Venus in defence of their doubles gold. The men’s champions, fellow Americans Bob and Mike Bryan, are also scheduled for Rio.

The full list of participants, just released by the ITF, proves once again that the Olympics are high on the list of priorities of the very best players in the world.

All the top 20 women in the WTA rankings, except for the retired Flavia Pennetta, are on the starting list, and all but four of the top 20 men will play, including Roger Federer, silver medallist in London, Novak Djokovic, who lost out to Juan Martin del Potro in the bronze playoff, and Stan Wawrinka.

The only men who have removed themselves from contention are No8 Dominic Thiem, who has chosen to focus on his singles career through the same period, along with No17 John Isner, No18 Nick Kyrgios and No19 Bernard Tomic.

Participants must also be ‘in good standing’ with their National Association and meet the minimum participation requirements of Davis Cup and Fed Cup. A few names have yet to complete that hurdle.

The Olympic Tennis Event will be played on hard courts, with 10 match courts, including a 10,000-capacity centre court, and two additional show courts seating 5,000 and 3,000, plus six practice courts.

The draw will be held on site at the Olympic Tennis Centre on Thursday 4 August at 11:00 local time.