Robbie Fowler’s message for Liverpool ahead of Chelsea clash 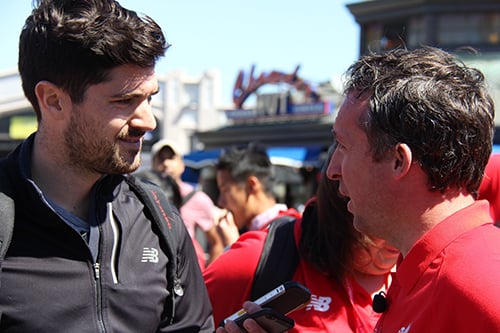 Robbie Fowler believes Liverpool should use their International Champions Cup games against Chelsea and AC Milan to build momentum ahead of the new Premier League season.

The Reds will take on Antionio Conte’s Chelsea side in their first game in California on Wednesday as the bitter Premier League rivals do battle at Rose Bowl in Pasadena.

Jurgen Klopp’s Liverpool squad will then travel upstate to Santa Clara to take on their 2005 and 2007 Champions League final opponents Milan at Levi Stadium on Saturday 30 July.

And Fowler, who is currently promoting the International Champions Cup in San Francisco ahead of Liverpool’s game against Chelsea in Pasadena next week, explained why beating the Blues and Milan is important ahead of the new campaign.

“Pre-season is all about getting fit,” Fowler told The Sport Review.

“In my opinion, it’s important that you win games. I’m not sure if Klopp has that same mentality. It is important that the players are ready for the season. It’s going to be a massive season.

“There are many clubs with new managers and new players. It gets tougher every year. It is important you hit the ground running and get as many wins under the belt so you can go into the season with more confidence.”

Klopp has already signed seven new players ahead of the 2016/17 campaign.