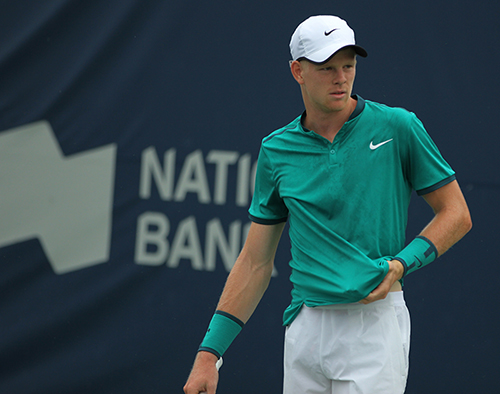 A feature of the men’s tennis tour this season has been the campaign to promote the rising stars of the game.

A handful of those #NextGen players already, in truth, need very little promotion. The group includes young men aged 21 and under in the top 200, but with one of them, No19-ranked Nick Kyrgios, seeded 11 at the Rogers Cup and another only missing the cut for a seeding by a week, No25-ranked Alexander Zverev, they are making their presence felt in a big way.

In Toronto this week, there are six in main-draw action. Alongside 21-year-old Kyrgios and 19-year-old Zverev are the No53-ranked Borna Coric and 63-ranked Taylor Fritz—teenagers both—and all four men have reached the final of a tournament this year. Indeed Zverev, in Nice and Halle, has made two, as has Coric, in Chennai and Marrakech.

However the best-known of the crew, Kyrgios, has not only won in Marseille this year, he has been notching up big wins and knocking out big names with impressive regularity ever since he was a teenager himself.

As things turned out, he was drawn against one of Canada’s own young hopefuls. Denis Shapovalov, the youngest man in the draw aged just 17, shot to fame only weeks ago by winning the Wimbledon junior title, and was awarded one of four wild cards in the draw here. However, he may have cursed his ill fortune in drawing the charismatic Australian for his Rogers Cup debut and for only his second tour match after losing in the first round in Washington last week.

But he is a young man on the move—as No2 in the junior rankings, too young and too late to be part of this year’s #NextGen, but his card will be marked for future campaigns.

Shapovalov climbed over 700 places in the rankings since January to a current 370, courtesy of three Futures titles and a semi run on the Challenger circuit too. No surprise, then, that his opening encounter with Kyrgios headlined opening night in Toronto.

Before that, though, the eldest of the #NextGen, No84 ranked Kyle Edmund, fresh from his tie-winning performance against Serbia to take GB to the semis of the Davis Cup, scored a late bonus in his debut appearance at the Rogers Cup: a place in the main draw after several late withdrawals.

He scored another plus in that draw, too: Canadian wild card Steven Diez, ranked 192, age 25, and yet to win his first match on the main tour.

But the conditions for the opening matches onto court were brutal: a blanket of humidity sat over Toronto after spectacular over-night storms. It was near impossible to sit and watch tennis let alone play.

Even before a point was played, both men were drenched in sweat, but Edmund’s big-hitting game made light of the heavy conditions and he took the first set with little trouble, 6-3. But the conditions—and perhaps a hangover from the emotional weekend in Serbia—began to take their toll.

Diez raced to a 5-0 lead in the second set before Edmund began to claw back with a break but it was not enough, and the Canadian levelled, 6-3. Diez continued to apply the pressure with a quick break in the third, broke again, and served out the biggest win of his career, 6-2.

It drew tears of joy from the Canadian, and not a little disbelief. Yes, the conditions were tough but, he pointed out, they were the same for both men.

He next plays No12 seed Bernard Tomic or qualifier Alejandro Gonzalez.

While Edmund was letting a set lead slip away, Coric, who also arrived here after taking his home nation of Croatia to the Davis Cup semis—via a third-round appearance in Washington—was doing the reverse.

Coric lost the first set to countryman Ivan Dodig, 5-7, smashed his racket in disgust, and went on to turn this gruelling two-and-a-half-hour encounter around, 6-4, 6-2. His reward for such impressive physical resilience will be No5 seed Tomas Berdych, in the second round.

Elsewhere, Kevin Anderson, who has been trying to recover from a long injury absence through the summer, managed to top Viktor Troicki, 7-6(4), 6-3, to set a second round match against No6 seed Dominic Thiem, the newest and youngest face in the top 10 at the age of just 22.

And while some of the younger generation were making waves around the Aviva Centre as the temperatures soared, 33-year-old Gilles Muller was beating Dmitry Tursunov, 7-6(5), 6-1, to set perhaps the most unenviable second-round match in the draw—against three-time champion and top seed, Novak Djokovic.