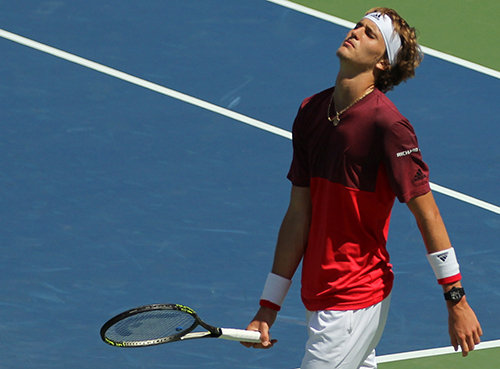 After one set of #NextGen players flaunted their stuff on opening day at the Rogers Cup, another set readied itself to do the same on a hotter but less humid Tuesday.

Teenager No53 Borna Coric had not just proved his worth in a gruelling two and a half hour, three-set tussle against Ivan Dodig on Monday, but he had to come back on Tuesday to take on an altogether tougher opponent: No5 seed Tomas Berdych.

Coric had already lost in straight sets in both their previous matches, but could his ever-improving fitness levels carry him a step further this time? It looked initially as though they could as he won a 6-4 first set, dropping just four points on serve. But the formidable Berdych hit back strongly in the second set, 6-1, and needed just one break in the third for the match, 6-4, as the young man’s serving level dropped. But right to the finish line, Coric ran the dimensions of the court in pursuit of Berdych’s huge drives.

Making his first appearance courtesy of a seeding in the draw, however, was the 25-ranked Alexander Zverev in a highly-anticipated debut. He played veteran Yen-Hsun Lu, ranked 70, who underwent elbow surgery at the start of the year.

If ever there was a foregone conclusion, then, this may be it. Zverev has risen inexorably through the rankings: He was around a 100 a year ago, 83 at the start of 2016, broke inside the top 50 before May, and onwards to his current career-high, 25.

He flourished in Washington last year—his first ATP 500 quarter-final—and just last week made the semis. Along the way he beat Marin Cilic in Montpellier, Gilles Simon in Rotterdam, and gave Berdych—and the Czech Republic—the scare of his life with a five-set marathon in the Davis Cup.

In Indian Wells, he let match-points slip against Rafael Nadal, finally losing 5-7 in the third set of the fourth round. In Munich he downed David Goffin for another semi run, reached his first final in Nice, his first third round at Roland Garros, and beat Roger Federer on his way to the final on Halle’s grass—and he nearly won that, too.

He was also playing plenty of doubles, fine-tuning his all-court skills. But perhaps that was his problem coming straight into Toronto days after his weary defeat to Gael Monfils in Washington. For he never looked at ease in front of the morning Centre Court crowd.

Lu, for his part, is a nimble, quick man with a swinging serve, touch at the net and good tactical awareness. What’s more, since his surgery, he had won two Challenger tournaments from four finals.

That all-round package, compounded by Zverev’s sluggish body, frustrated the teenager from the start. Everything seemed to distract him, but he held off break points in the second game and another in the sixth, before making what looked a decisive break himself for 4-3.

The German teenager’s frustration was compounded as much by his own errors as Lu’s mix of shots, and Zverev gesticulated to his box as Lu broke back.

Come 5-5, and already with one thrown racket, he pounded a ball into the crowd and was duly warned. Serving to take the set to a tie-break, he hit a sequence of up-tight shots to give up an easy break and the set, 7-5.

Now even the line-calls seemed to disrupt Zverev’s focus, plus the odd floating plastic bag, and a time violation warning. Lu kept calm, played his game, and broke in the sixth game, and even fended off a fight-back by the German and two break points for 5-2.

Now the man from Chinese Taipei, who stands 7ins shorter and 13 years younger than his tempestuous opponent, had to show his mental resolve one last time, serving for the match but 15-40 down. He fought back to deuce, and finally converted his third match point with a winning serve.

But if the #NextGen vs #OldGen in this match looked one sided, Lu’s next match looks ever more so. He plays home hero, Wimbledon finalist and No4 seed Milos Raonic.

Another teen, qualifier Jared Donaldson, did make Round 2 when John Millman retired down a set and break. Donaldson will next play either Fabio Fognini or Steve Johnson.

No10 seed Monfils, fresh from winning the biggest titles of his career, the Washington 500, has looked in good form all year with quarter-finals at the Australian Open, Indian Wells and Miami, though has continued to have his share of injury problems. But he raced past the 36-ranked Joao Sousa, 6-3, 6-3, and next plays either Vasek Pospisil or Jeremy Chardy.

A final word for the oldest man in the Rogers Cup draw, qualifier Radek Stepanek. The 37-year-old caused one of the upsets of the tournament so far by beating No15 seed, Benoit Paire, 6-1, 6-3. He could go even further, too: He next plays the 247-ranked Canadian wild card Peter Polansky.