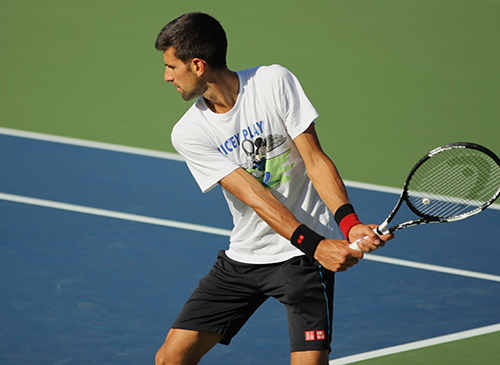 It has been something of a double-edged sword, the story that unfolded in the men’s draw over the last week.

One minute, the Rogers Cup had a full complement of top players—the entire top 12, in fact—and the next came the withdrawal of No2 Andy Murray, No3 Roger Federer and No4 Rafael Nadal, former Toronto champions all.

Then just as the draw was about to be made, No10 Jo-Wilfried Tsonga—winner here in 2014—and No21 Feliciano Lopez—semi-finalist in 2014—pulled out, along with No15 Roberto Bautista Agut and No20 Pablo Cuevas. No14 Richard Gasquet was always in doubt after picking up a back injury at Wimbledon, and Albert Ramos-Vinolas was a late injury departure.

It is a problem that the Rogers Cup has often faced through no fault of its own—it carries the same points as all the other Masters, and a purse of almost $5million. But it is the earliest Masters event after Wimbledon—which is now a week later in the annual schedule to aid the transition from Roland Garros’s clay to London’s grass. But more a problem this year is the Olympics.

Every four years, and always in an even year like Toronto’s residency, this poses big physical questions for men with medal ambitions. There may be no points available in Rio, but the lure of gold and the preparation it provides for the hard-courts for Cincinnati and New York, make it a tempting alternative to Canada.

In fairness to Murray—exhausted from his run to the Rome title, the French Open final, and the Queen’s and Wimbledon titles—he clearly needed to recharge his batteries. Federer, only lately back on court at Wimbledon, suffered a heavy fall onto the knee that underwent surgery earlier this year. He thus needs to ensure complete confidence in his body before Rio and beyond. And Nadal, who has carried a wrist injury since retiring during the first week of the French Open, must be as distressed as anyone at how much time he is missing from this vital phase of the tour.

Some, though, have opted to switch back to clay for a fortnight, and Lopez and Cuevas, both in their 30s, made the finals of Gstaad and Hamburg respectively. And without putting the cat among the pigeons, the likes of Ivo Karlovic—winner on grass in Newport last week and now a finalist at the ATP500 in Washington—and Steve Johnson—who also played in Newport and has reached the semis in Washington—may find the fast turnaround to Toronto very tough.

What it all this means is that, of the 45 direct entries before wild cards and qualifiers are added to the 56-man draw, the 89-ranked Dmitry Tursunov makes the cut.

No wonder tournament director Karl Hale is disappointed, to the extent that he talked about it at the official draw:

“We’ve already talked to the tour. We’ve talked to the players and the ATP to show them that we’re not happy about this… We want make sure that this doesn’t happen again because we can’t have this happen every four years.”

But what of the sharp edge of that sword?

The first bonus is that home hero, No7-ranked Milos Raonic, will top his own quarter as No4 seed (and incidentally, another Canadian Vasek Pospisil, enters the draw by right, thereby releasing a wild card to a compatriot).

Raonic has always had big ambitions, and slowly but surely he is fulfilling those ambitions. Now with two former No1s, Carlos Moya and John McEnroe, in his coaching corner, he has beaten Federer twice to win Brisbane and reached the final of Wimbledon. He made the semis in Australia, led Andy Murray in the final of Queen’s, made the final of Indian Wells, and reached the quarters of three more Masters.

In short, the big Canadian with the big serve and big forehand has improved almost every facet of his game: fitness, movement, net play, and even that serve. He also, as it happens, achieved his first big breakthrough at the Rogers Cup in 2013 when he reached the final—fending off Pospisil in the semis in a final-set tie-breaker.

Unfortunately, Raonic has been drawn in the same half as Novak Djokovic, so Canada will not enjoy both the world No1 and Raonic in a title showdown. He also happens to be in a demanding segment that contains Alexander Zverev, Fabio Fognini and Johnson.

World No1 Djokovic has barely put a foot wrong in the first half of this year, backing up the 11 titles he won last year. First it was the Doha and Australian Open titles, then back-to-back Indian Wells and Miami Masters wins, followed by the Madrid title, Rome final and the French Open crown. And that meant he had done what none of his rivals had: won all four Majors in a row.

Come Wimbledon, though, the effort cost him dear, and he lost before the quarter-finals in a Major for the first time in seven years.

But by the time he arrives for the Rogers Cup, where he is a three-time champion, he will have played just three matches in seven weeks, and thus be fresher than most of his rivals for the hard road to Rio and New York. He heads the Toronto field, is probably favourite to win his first Olympic gold, and may even tick off one more unique record in Cincinnati: the only player to win the complete set of Masters.

That his closest rivals are not playing Toronto will surely help his cause, too, and until the promised Raonic semi, he has drawn Tomas Berdych—who has won against the Serb just twice in 26 attempts—or John Isner—similarly with just two wins over Djokovic—in the quarters.

Time and space for Wawrinka to shine

2016 has blown hot and cold for the Swiss, starting with wins in Chennai and Rotterdam but followed by just two match-wins in the Indian Wells-Miami double-header. He failed to defend his French Open title though made the semis and also won in Geneva, but then won just one match at Queen’s and Wimbledon combined.

In Canada, he has reached the quarters only once in nine attempts, and Cincinnati has not been much better—one semi run in 2012. But there is no doubting he can perform on hard courts, as the Australian and US Open testify.

A period of recuperation and training over the summer should leave him fit for the rigours of the four big back-to-back events through to September. He begins, though, with a testing draw that contains the likes of a possible first meeting with Jack Sock, followed by Dominic Thiem, and then either the in-form Marin Cilic or dangerous No3 seed Kei Nishikori—though Wawrinka has winning records over all of them.

And he has an big incentive: He is being chased in the rankings. As he said during the draw ceremony: “It’s a big, important event for me. I’m not taking it as preparation for me. It’s important to try to play well for my personal ranking and year.”

Can Nishikori find that winning form?

No3 seed Nishikori has played the Rogers Cup seldom, and only once been to Toronto: he won just five games in his opening match against Sam Querrey. But he did have a successful run in Montreal last year, beating Nadal to reach the semis. And having opted not to defend his Washington title this week, he could certainly make the quarters again—where he would probably face either Cilic or Nick Kyrgios, though Cilic has a demanding segment where he could open against Karlovic.

The Japanese star has often been let down by his body, but if he is fit, he can be formidable, and he has Wawrinka in his sights—though also Raonic on his tail—in the rankings.

Are the teenagers ready to rumble?

There is room, in a draw that has so many established stars missing, for some new faces, particularly among #NextGen stars, to make deep inroads in one of the elite tournaments of the tour.

Three former junior No1s are in the draw and making waves. Top of the pile is the tall and impressive Zverev, though he is currently playing for a place in the Washington final, which would be his third final on a third different surface. The 19-year-old is already ranked 27, and at 6ft 6in, he is becoming a formidable force. His problem, aside from fatigue from Washington, is that if he beats Yen-Hsun Lu in the first round, he could face Raonic.

Borna Coric, also 19, ended last year as the youngest man in the top 50, though his form this year has been up and down. It began with a final run in Chennai, took in another final in Marrakech, and most recently he made a tie-winning rubber over Sock in Davis Cup. However, his section is full of big serving men—Berdych and Isner—and he is in Djokovic’s quarter.

Then there is the 6ft 4in 18-year-old Taylor Fritz. He won the US Open junior title last year but is already 67 in the senior rankings and reached the final of Memphis. He does find himself in a difficult section, beginning the Karlovic, then possibly Cilic and one of either Grigor Dimitrov, Kyrgios or another rising teenager, Canadian Denis Shapovalov.

The 17-year-old junior Wimbledon champion Shapovalov has been shining on the Futures circuit, but this will be only the second time he has played in a main ATP draw after losing in his opener in Washington last week. It does not help his cause that he plays Kyrgios in his opener, though it stands out as one of the first-round matches of what, for all the absentees, an intriguing draw.