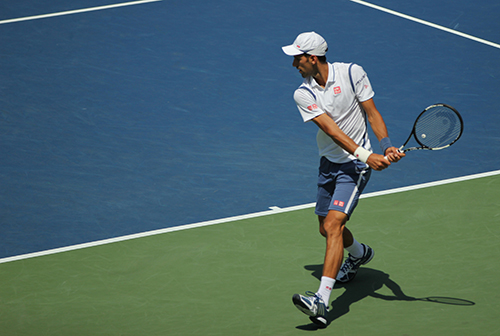 Gael Monfils may have lost in the first round of Rome and of Wimbledon, and he may have been forced to bypass the French Open with illness, but either side of that mid-year dip, 2016 has been something of a renaissance for the charismatic Frenchman.

With just one title and one final since the start of 2014—and ATP 250s at that—tennis started to see something of the brilliance and athleticism that entertained fans, and even foes, when he burst onto the senior tour after winning three junior Grand Slam titles in 2004.

For Monfils, now aged 29 and, it seems, largely injury free for the first season in many a year, has been making a name for himself as he climbs within touching distance of the top eight in the Race: And even when he reached No7 way back in 2011, he did not make it to the World Tour Finals.

He refused to contemplate doing so this year, preferring, he said, to look forward to celebrating his birthday first—his 30th falls on the 1st September.

But with his results this year under a new coaching partnership with Mikael Tillstrom, it has become a very real possibility—even if his run in Toronto came to a halt against the man who has dominated proceedings for much of the last two years, three-time Rogers Cup champion Novak Djokovic.

It has been a long time coming since the rangy Monfils moved from junior success to a semis run at the French Open as a 21-year-old in 2008, then made the final of two Masters in the next couple of years.

With a two and half year drought in titles, he came progressively closer this year: Quarter-finals at the Australian Open, Indian Wells and Miami, and finals in Rotterdam and the Monte-Carlo Masters, where he took Rafael Nadal to three sets.

Then after that dip, he won the ATP500 in Washington, his first ever title at that level, and his first of any kind since February 2016, and only his sixth in 11 years on the tour.

In Toronto, he had put out some top quality opposition, too: home favourite Vasek Pospisil, No7 seed David Goffin, and then No4 seed Milos Raonic.

But against Djokovic, who had beaten him in all 11 previous meetings, including two in this tournament?

The mighty Serb arrived here on a 46-4 run, as No1 for over two years, and had already won the Doha and Australian Open titles, back-to-back Indian Wells and Miami Masters, and followed the Madrid title, with the Rome final and the French Open crown.

Astonishingly, he had reached the final in 13 of his last 14 Masters appearances, winning 10 of them, and should he win his fourth Rogers Cup, he would extend his record Masters tally to 30.

Such were the odds that Monfils had to overcome, but the first half dozen games promised much.

Djokovic had to fight off break points in the first game as he took longer to settle, and Monfils took advantage in the third game to bring up three more break chances. Djokovic double faulted on the third and the Frenchman had the lead.

But it lasted just minutes. Monfils made the fatal error of getting into long baseline rallies, and with his serving floundering below 50 percent, Djokovic worked into his hypnotic rhythm, driving Monfils from side to side.

Two of the longest rallies of the tournament ushered in a break back, and after more than 20 minutes of tennis, they stood at just 2-2. The match looked promising.

But Monfils seemed to be lost for ideas, or perhaps was beginning to suffer from the fatigue of the last fortnight. Djokovic broke him to love, 4-2, and served out the set, 6-3.

More evidence of fatigue—perhaps mental—came in a poor drop-shot attempt from Monfils on break point in the first game of the second set. An immediate break was followed by a love hold, and briefly, the Frenchman found some more inspiration with three winning net plays.

For a moment, it looked as though Monfils would make inroads, and he made a crowd-pleasing slam-dunk of a smash for break point, but he saw a net-cord roll back and the chance was gone. Djokovic held, broke a dispirited Monfils again, and with his serving now close to perfect—the top seed dropped just four points on his first serve, and that was at 80 percent—he had no trouble serving it out in a scant 73 minutes.

That makes, then, a truly remarkable 14th final from Djokovic’s last 15 Masters. Now only Kei Nishikori can halt him, can deny that fourth Rogers Cup and a 30th Masters title. He has done it before, twice, but has lost the last eight of their 11 matches. It is a challenge of the highest order. Just ask Monfils, who put it thus:

“He was missing a little bit [at the start]… and then suddenly I think he didn’t miss. He was going for his shots and being much better in the rallies. Suddenly being not even solid but super solid.

“When Novak is playing like that, it’s very tough to beat him.”