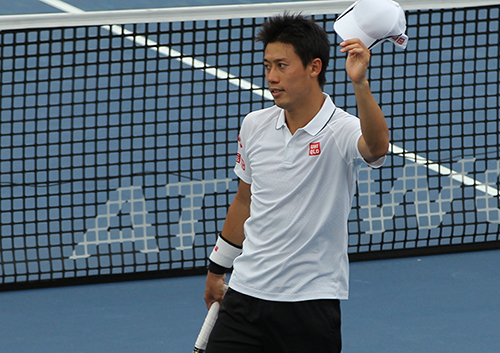 The Rogers Cup has certainly faced a week of challenges in Toronto.

First came the withdrawal of defending champion and world No2 Andy Murray, in desperate need of recuperation after great clay and grass seasons.

Then it was No3 Roger Federer and No4 Rafael Nadal, both former champions, both injured and out And at Toronto’s sister tournament in Montreal, the top seed Serena Williams was swiftly followed out of the door by No3 Garbine Muguruza.

Back in Toronto, four men were forced to retire before the third round, including young star Dominic Thiem, making his debut in the top 10. And meanwhile the weather made life tough for those who were left. With the temperature in the mid 30s and the humidity touching the 90s, it was a wonder any of them could survive three-set battles, yet come mid-week, there was plenty to cheer.

Wimbledon junior champion, the 17 year old Canadian, Denis Shapovalov, thrilled his home crowd by winning his first main-draw senior match—and where better than on Toronto’s Centre Court? What’s more, he was one of five Canadians in the second round.

Against the odds, there were the two oldest men, both 37, into the third round: Radek Stepanek and Ivo Karlovic each took out one of the seeds.

Yet through rain-storms and baking sun, the cream rose to the top in the shape of the three top seeds, three of the top six men in the world, Novak Djokovic, Stan Wawrinka and Kei Nishikori.

Only one scheduled player did not make it, and unfortunately for Toronto it was their biggest star, the face of the tournament, No4 seed Milos Raonic.

Not that many would deny his hugely talented conqueror, No10 seed Gael Monfils. For through a catalogue of injuries, assorted coaches, and hot and cold form, this superb athlete decided to break Canadian hearts this week playing some of his best tennis in years.

The first match, between Wawrinka and Nishikori, was altogether less predictable, however. Both with titles already this year, one—the Swiss—with a Grand Slam semi and the other—the Japanese—with a Masters final and three further Masters semis to his name, they had split their last two matches. And both those matches had been on hard courts in Major quarter-finals.

The afternoon conditions were perfect for what promised to be a perfect match, one full of crisp shot-making and variety. And the first set lived up to that promise. Wawrinka brought to court the sizzling form he had shown in demolishing Kevin Anderson in the quarters, broke in the third game, and fought off a break-back point to go 4-1. He seemed to be cruising while Nishikori looked a little sluggish.

But from this moment on, Nishikori lifted his level and went on the offensive. He worked two more break chances in the seventh game but saved them with some big serves, only to see the Japanese man hold to love and this time to break, helped by a cruel dying net-cord winner. A terrific hold by Nishikori, with winning forehands and a deadly drop shot, and it was 5-5.

Yet again, for the fourth game in a row, Wawrinka faced break points, but again he served well to hold and, in the blink of an eye, had two set points as he rifled two returns at Nishikori’s feet. He would rue missing his chance.

In the subsequent tie-break, Nishikori gave the Swiss an early lead with a double fault, then levelled, but Wawrinka fired down a 218 ace to take it to 6-4 and two more set points. Again the Japanese levelled, Wawrinka double faulted, and Nishikori completed a four-point run to take the set, 7-6(6) after 63 minutes.

The crowd was enthralled, and shared their support between the two players. They expected more of the same—but they did not get it. Wawrinka lost concentration, conceded a quick break with two loose backhands, and Nishikori’s tidy tennis took advantage.

The fourth game summed up with set: Wawrinka set up a perfect point to finish with an easy smash and fired it wide. He leant on the net in disbelief and hid his face in his shirt. He was 0-4 down, and Nishikori rubbed salt into the wound with two aces to hold for 5-0.

Wawrinka did take one game, to some sarcastic applause, but he had lost interest as well as focus, and Nishikori served it out to love, 6-1, for his second Masters final of the year, his 19th career final.

The Japanese man has, over the years, suffered assorted and repeated injuries, and his grass season was decimated by a rib injury: He pulled out of the second round of Halle and retired in the fourth round at Wimbledon. He then opted not to defend his Washington title, but the rest and recuperation have paid off.

He will move to fourth in the Race to London whatever happens in the final, but his chances of the title would depend on who won the second semi-final. Against Djokvoic, Nishikori has lost nine of their 11 matches, and all eight since their storming US Open semi-final in 2014. But against Monfils, Nishikori has edged, just, their two matches both in best-of-three contests.

That said, this year has brought a different Monfils, a determined and winning Monfils, as Nishikori was only too aware:

“I think both guys are playing great tennis right now, especially Monfils. He’s won Washington and I saw some yesterday against Milos. It was great match he played.

It would, though, be a few hours before his opponent was determined.

Federer’s right-hand-man Luthi has no doubts: ‘It’s incredible how positive and inspired he is’