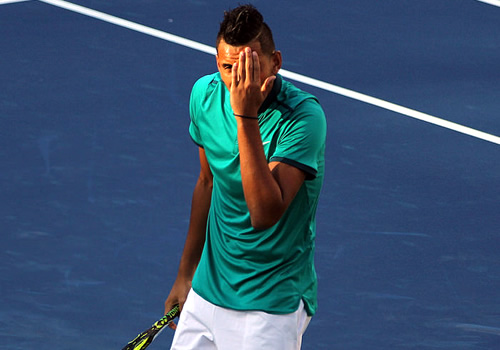 It was little wonder that the show-piece match of opening Monday featured these two particular members of the #NextGen.

For a start, one of them, Denis Shapovalov, though not technically one of the under 22s in the top 200, was Canadian, was the youngest man in the draw—age 17 and three months—and was current world junior No2 after winning Wimbledon and reaching the semis at the French Open.

And while he may have been playing only his second main-tour match with a wild card entry, he was a young man on the move, up over 700 places in the rankings since January to a current 370 courtesy of three Futures titles and a semi run on the Challenger circuit too.

What’s more, he played with a youthful, free-swinging abandon with his left hand—unusual in itself—but also a single-handed backhand.

He may have counted himself unfortunate to be drawn against the one member of the #NextGen, 21-year-old, Nick Kyrgios, who had already begun to fulfil his prodigious talent: He was the tournament’s No11 seed.

And while three other #NextGen players had made finals this year, Kyrgios had won his first title in Marseille, though in truth, he had been notching up big wins and knocking out big names with impressive regularity ever since he was a teenager himself.

In 2014, he made his first Grand Slam quarter-final at Wimbledon, followed by a similar run in Australia six months later. This year, he reached his first Masters semi in Miami and backed it up with a quarter run in Madrid.

That win in Marseille came at the expense of the likes of Richard Gasquet and Tomas Berdych, and he has since claimed the scalps of Milos Raonic and Stan Wawrinka, two of the top four seeds in Toronto this week—and all despite missing time this season with an elbow and then a back injury.

Kyrgios is also a big personality with an image to match: Tall, fast, with power, touch and an unpredictable game and demeanour. He can upset but he can thrill, but few would disagree that he invigorates the tour.

As might be expected from two such unconventional stylists, from two who play with rare speed between points, the match unfolded unpredictably. Straight away, Shapovalov faced three break points, but with a couple of massive serves and forehands he held.

Kyrgios has a habit of looking absurdly laid back, even uninvolved, but he served up a storm. It was just as well: In between, he seemed to struggle to read the kicking shot-making of his opponent.

And despite being distracted by something off court, Kyrgios did not face a break point the whole set, while Shapovalov had to save a fourth to keep the match on serve at 4-3.

Kyrgios continued to shake his head, slap the ball, even lose his racket on one serve. But he stayed on level terms—until the tie-break.

Still more distracted, a double fault saw him 0-3 down, and the Canadian, to whoops from the crowd, could barely lose a point. He served out the set, 7-6(2) in under 40 minutes.

Whatever was upsetting Kyrgios, the umpire would have none of it, and the Australian knuckled down to dig himself out of a big hole in the first game: five break points came in flurry of aces and double faults, but having held, it was Shapovalov who lost focus to give up the break.

In this topsy-turvy encounter, though, he broke straight back, only for Kyrgios to break again in the eighth game. After just an hour and 11 minutes, he had levelled the match, 6-3.

The deciding set began, as it must, in the same bizarre way: Kyrgios double faulted on break point —in what would become a tally of 18 in the match—and in the blink of an eye, Shapovalov was 3-0 up. The Canadian never lost the advantage, though at the final hurdle, he faced and saved his only break point of the set with an ace, and a forehand sealed his first main tour victory.

What better place to make such a statement? Even the home crowd seemed taken aback by the quality of their new young star. He looked, one member of the public commented in near disbelief, “just a kid”. The reply came: “Well he is!”

But he is a kid who has morphed into a senior before Canada’s eyes. It was a joy to behold, not least because of the panache and abandon with which he seized the day.

And talking of panache, he next plays another one-hander with bags of flair and talent: Grigor Dimitrov.

The Bulgarian, a former top-10 player, is currently down at 40 after a season of up-and-down results and uncertain confidence. However, he survived a severe test from the edge of defeat in beating Yuichi Sugita after two and a half hours and a set and break down, 5-7, 7-6(5), 6-4.