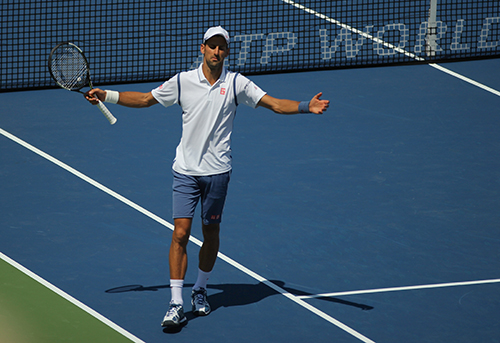 The Rogers Cup must wonder what it has done to deserve the ill fortune handed out to it this year.

It is always a challenge, this first hard-court Masters of the US Open Series that follows the long clay and grass seasons, for it ushers in an intense swing on North America’s hot courts through Washington, Atlanta, Cincinnati and on to New York. This year, too, the demanding schedule is exacerbated by the addition of the Olympic Games in Rio.

It was, then, probably not too much of a surprise that players with physical niggles took the pre-emptive decision to pull out of Toronto. So from a full complement of the top 12 players, the tournament was suddenly without world No2 Andy Murray, No3 Roger Federer and No4 Rafael Nadal, former Toronto champions all.

But these headliners proved to be just the start. No10 Jo-Wilfried Tsonga—winner here in 2014—and No21 Feliciano Lopez—semi-finalist in 2014—pulled out, along with No15 Roberto Bautista Agut and No20 Pablo Cuevas. No14 Richard Gasquet was always in doubt after picking up a back injury at Wimbledon, and Albert Ramos-Vinolas was a late injury departure.

Yet there remained plenty to whet the appetite. The best player of the last couple of years, Novak Djokovic, returned to the fray in pursuit of his fourth Rogers Cup. No4 seed and home favourite Milos Raonic was joined by four more Canadians in the second round. Ever-popular Stan Wawrinka and the most successful man in Asia, Kei Nishikori, always pull the fans. However, more trouble was brewing.

Dramatic lightning storms in the early hours of Monday brought challenging humidity for first-round players. Wednesday morning was up to 30 degrees by 11 am, and still rising as the clock approached 4pm, despite a blustery wind.

And players, perhaps already depleted by the previous weeks, retired. John Millman handed a win to Jared Donaldson courtesy of a left wrist injury. Jeremy Chardy could manage only one set against Vasek Pospisil before a foot injury intervened.

The two retirements in Round 2 came within minutes of each other. Sam Querrey shot to attention last month by beating Djokovic in the third round of Wimbledon and advancing to the quarter-finals. He then made the quarters in Washington last week, but having won his opener here, he was forced to retire with a back problem against No7 seed David Goffin.

Dominic Thiem, the newest and youngest man in the top 10, seeded No6, enjoyed a bye in the first round but his opener was always going to be tough against the big-serving former top-10 man Kevin Anderson.

Thiem arrived here with the most match-wins on the tour, 48-14, and four titles, and he made his first Major semi-final at Roland Garros. He had, though, declined to take time out after Wimbledon and switched back to clay—unsuccessfully—having already asserted that points on the tour were his priority over the Olympics.

All that tennis took its toll, and within minutes he had called for the trainer to tend his hip. At 1-4 down, he retired, and admitted afterwards that he had been feeling the injury for a couple of weeks.

But he still plans to go to Mexico after heading home to Austria for an MRI scan:

“Maybe I took it easier a little bit too late, so now I have couple of problem. Still probably the second half [of the year] is a little bit easier. Not so many tournaments. So I hope I’m 100 percent again in Los Cabos and then to play refreshed the last quarter of the season.”

But Round 2 brought other upsets aside from retirements. The two oldest men in the tournament, both 37-year-olds, beat their younger opponents. Ivo Karlovic is on an extraordinary roll of form, arriving in Toronto after failing to convert a championship point against Gael Monfils in Washington—and that on the back of the title in Newport. Here, he beat teenager Taylor Fritz, almost 20 years his junior, in three sets, and capped Wednesday with an even bigger win over No8 seed Marin Cilic—in straight sets.

The evergreen Czech has excelled in recent years in doubles and Davis Cup—and is already into the quarter-finals in doubles here after taking out the No4 seeds with partner Tomas Berdych—but this former world No8 is currently 129 in singles and has faced qualifying through the entire year. Even so, he gave Murray the scare of his life at Roland Garros after taking the first two sets in their first-round encounter, and now finds himself facing the top man bar none, Djokovic.

Stepanek’s only win over the Serb came in Rotterdam 10 years ago, though he pushed Djokovic hard as recently as the second round of Wimbledon in 2014.

The top seed resisted a stern test from the big-serving left-hander Gilles Muller. The No37-ranked man from Luxembourg stayed on level terms until 5-5, but then a blistering backhand worked a break point for Djokovic and another backhand cross-court pass got the break. He served out the set, 7-5.

The two exchanged breaks early in the second set, but then Djokovic got what looked like a decisive break for 5-4, only to double fault and then see a Muller winner flash by to level 5-5. However, Djokovic raised his level in the tie-break, and closed out the match with a winning serve, 7-6(3).

He was pragmatic about the unevenness of his match:

“[Muller] likes to play quick, and I think the warm day like today played a lot in his favour. I managed to start of the match well and get a set and a break up, and then I dropped my serve twice in the second set. Those are the only, let’s say, downsides to the match.

“Other than that I’m quite pleased with the way I held my nerves and was focused, and just the overall performance was very pleasing considering it was the first hard court match for a long time.”

Yes, Djokovic will surely get better as the tournament progresses, and no matter the extraordinary run of Stepanek, Djokovic will be hot favourite to reach the quarter-finals. Who joins him is perhaps in the hands of the injury gods.

Rogers Cup Toronto: Novak Djokovic the diplomat, on and off the tennis court