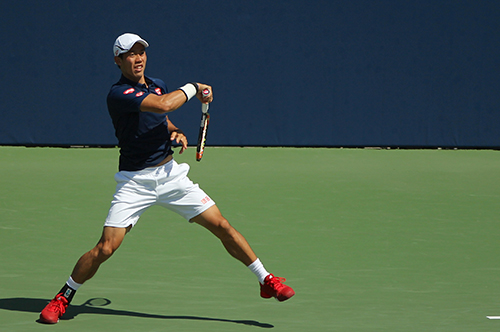 World No5 and the No2 seed at the Rogers Cup, Stan Wawrinka, closed proceedings in Toronto with perhaps the best match of the tournament so far, precisely two hours of stylish, fast and varied tennis against fellow single-handed 30-something, Mikhail Youzhny.

Not everybody stayed late, but those who did cheered ever louder as the two men cranked up the winners and the tension.

After exchanging breaks in the first set, Wawrinka took the tie-breaker, 7-6(3), with a signature backhand winner out of the top draw.

Youzhny, owner of a PhD, a former No8 in the world, and a quarter-finalist at all four Grand Slams—twice into the semis at the US Open—was not going to go down quietly, though. After all, the two men had split their previous six matches, 3-3.

He raced to a 3-0 lead, Wawrinka broke back and, again, they headed to a tie-break—and this one was even closer than the first. But again Wawrinka just edged it, 7-6(8), with another backhand, his 31st winner of the match.

2016 has blown hot and cold for the Swiss. He began with wins in Chennai and Rotterdam, but followed with just two match-wins in the Indian Wells-Miami double-header. He failed to defend his French Open title though did make the semis and also won in Geneva, but then won just one match at Queen’s and Wimbledon combined.

In Canada, he has reached the quarters only once in nine attempts, but with a draw depleted of Andy Murray, Roger Federer and Rafael Nadal, and drawn in the opposite half from favourites Novak Djokovic and Milos Raonic, he has a good chance of making a mark this year.

So ‘Stan the Man’ was the first man from the bottom half through to the third round, and the next seed in his half, No3 Kei Nishikori, was the first to try to join him Wednesday morning in the sweltering 30 degree heat.

The nimble and crisp-hitting Nishikori has played the Rogers Cup seldom, and only once before been to Toronto. But he did have a successful run in Montreal last year, beating Nadal to reach the semis.

After some injury problems during the grass season—he withdrew at Halle and retired in the fourth round of Wimbledon with a rib injury—he opted not to defend his Washington title last week, and leading into the summer, he put together some fine form to consolidate him firmly in the top six.

Hard courts in particular proved successful, with the Memphis title, the Miami final, the quarters at Indian Wells, before come clay, reaching the final in Barcelona and two semis at the prestigious Madrid and Rome Masters—losing to Djokovic on both occasions.

In this opener here, he took on 22-year-old qualifier Dennis Novikov, and quickly raced to a 4-0 lead with two breaks.

Then Novikov came to life, held to love and broke to love as Nishikori looked slow to respond. And the upsets continued: Nishikori double faulted on break point in the eighth game to make it 4-4. His head dropped and he seemed to be struggling with the conditions as well as the form of his opponent.

But in the blink of an eye, Nishikori strung together a sequence of precision points, now a cross-court pass, now a winner down the line, to gasps of admiration from the crowd, and he had another break. With 33 minutes on the clock, he sealed the first set, 6-3.

The second set also began with an exchange of breaks, Nishikori’s again coming from a double fault.

The fifth game opened with surely the rally of the tournament so far, an extraordinary exchange in which Nishikori recovered from a fall, picked up a drop shot to make a lob, and finally retrieved a smash to win the point.

But they stayed on level terms to 5-5 before Nishikori got the required break, and he served it out, 7-5.

His next opponent, though, will not be the expected one, as 22-year-old Lucas Pouille, one of the fastest risers in the rankings in recent months and the No13 seed in Toronto, lost out to a man a decade his senior, Rajeev Ram, 6-4, 7-6(5).

Elsewhere, another veteran, the oldest in the draw, 37-year-old Radek Stepanek, beat wild card Canadian, Peter Polansky, 7-6(5), 6-4. His reward, should Djokovic win his opener against one more veteran, the 33-year-old Gilles Muller, will be the top seed in the second round.