Stan Wawrinka, Grigor Dimitrov and Kei Nishikori all move into the fourth round of the Rogers Cup in Toronto 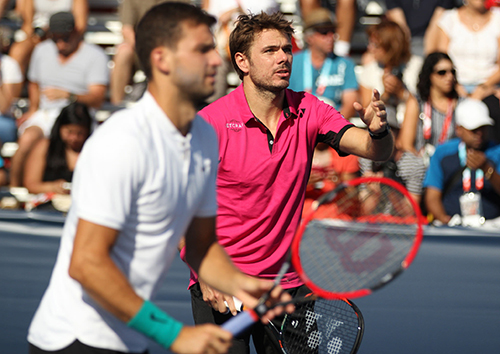 The Rogers Cup has not just been enjoying plenty of Canadian success but plenty of North American success across the board.

The prospects for 19-year-old 147-ranked Jared Donaldson were slim: He faced Raonic in a bid to get to the quarters having already, in getting this far, made his first Masters third round and scored back-to-back wins for the first time. Those wins, though, will long linger in his memory banks, first a victory over the No67 ranked Aussie John Millman, forced to retire at a set and a break down, then over the charismatic Fabio Fognini in three tough sets.

Ryan Harrison, who broke into the top 50 at the age of 20, is now age 24 and ranked 144, but has always been an unpredictable and often under-performing man. Here, he caused an upset over countryman John Isner, the No9 seed, in a two hour 22 minute marathon and in formidable 33-degree temperatures, but would now play the No5 seed Tomas Berdych.

The 32-year-old Rajeev Ram, ranked 118, was enjoying his best ever run at the Rogers Cup, and took out Ernests Gulbis in his opener and No13 seed Lucas Pouille in the second without dropping a set. But even carrying the remnants of a rib injury into the tournament, No3 seed Kei Nishikori was far too hot for Ram in a humid opening contest on Centre Court.

It took the Japanese star just 68 minutes to put out the American, 6-3, 6-4. Nishikori was more than happy with his tennis if not entirely confident yet about the injury that forced him to pull out of Halle and retire in the fourth round of Wimbledon:

“The first set I played really good tennis. I had some tough times, but this score shows I was dominating a little bit.

“I’m still not 100 percent yet, but feeling pretty strong. We’ll have to see after a couple of more matches, but right now I feel good.”

So it was down to the No16 seed Jack Sock to save the day for the United States. He was already responsible for ending the hopes of two compatriots, but now had to take on No2 seed Stan Wawrinka in their first ever meeting, and it proved to be as pugnacious an encounter as their big games promised.

Wawrinka has looked a cool, calm and collected man since he arrived in Toronto. Perhaps his history here, with just one quarter-final run in nine attempts, took off the pressure from the big right arm of the Swiss. No doubt it also helped to be in the opposite half from both Novak Djokovic and Raonic.

He had even opted into the doubles tournament here, too, and clearly enjoyed himself with fellow single-hander, Dimitrov.

“When Grigor asked me, I was, OK, let’s play. I think we played well together. Always enjoy when I play with someone I like to have fun.”

They did too, beating Dominic Thiem and Lucas Pouille in a 12-10 deciding tie-break.

In singles, Wawrinka had already been a half of one of the best matches of the tournament so far on opening night against Mikhail Youzhny, coming through in two glorious tie-break sets.

Sock was a different kettle of fish, a big server willing to rush the net to finish, and able to whip a vicious forehand. In very different conditions of high humidity, the Swiss had to face off a break point in the fifth game, but had the American under pressure in the next—four deuces, two break points. Sock also held, and they headed, inevitably, to a tie-break.

Once there, they remained level only as far as 3-3, and a double fault from Sock opened the Wawrinka flood-gates. The Swiss sailed to the set, 7-6(3).

Sailed is the right word for the start of the second set, too. Wawrinka broke immediately, looking more confident by the game. He broke again—and had won 12 out of the 15 points—and apart from a slight waver in the final game, he resisted two break points to held for just his second Rogers Cup quarter, 6-2.

He next faces Kevin Anderson, who has beaten him in four of their last five matches, though Wawrinka won their most recent in ease.

Anderson is certainly coming back to form after a season marred by injury. Unseeded here after breaking the top 10 last October, he came from behind to beat No12 seed Bernard Tomic, 4-6, 6-3, 6-4.

Even in discussing the match ahead, Wawrinka was laid back, literally, as he faced the press:

“Was tough match today. Tomorrow I’m playing against Anderson who I lost many times. I lost two years ago when I played him here. It’s going to be interesting match to play again against him. It’s always been difficult to beat him, but hopefully I can do that tomorrow.”

With that he was off for his next doubles match:

“Yeah, I normally enjoy playing doubles. I just don’t play too much, because it’s always difficult to find the right schedule, not to overplay and not to get injury.

“The fact that I didn’t play for four weeks after Wimbledon, I had good preparation. You know, you can practise a lot, but nothing can beat to playing points with the stress, with the nerves.”

He had to wait, however, for partner Dimitrov, to complete his own surge to the quarters against Karlovic, which he did in some style, 6-3, 7-5.

The popular Bulgarian, who suffered a six-match losing streak until reaching the third round at Wimbledon, was thrilled.

“Big win for sure. He is playing great tennis over the last four weeks. I’m happy with the way I played though. Now I’ve got three wins in a row, that’s very good for me. So feet on the ground and on to the next one.

“I’m not the favourite to win [the next match against Nishikori] but I’ve been playing great tennis. I’m just getting back my confidence, but he’s a great player it should be interesting.”

Rogers Cup Toronto: Novak Djokovic the diplomat, on and off the tennis court