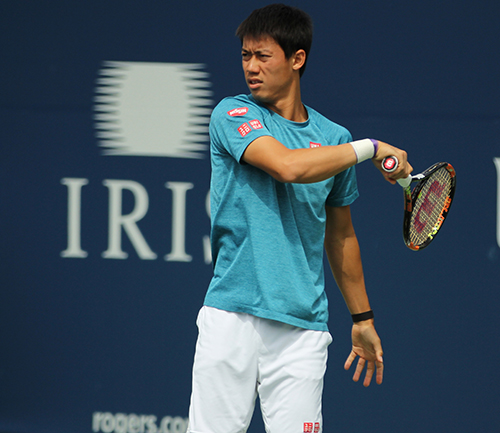 Come the quarter-finals of the Rogers Cup, and the cream has risen to the top.

Each of the four matches saw the correct seed in his rightful place, and with not a set dropped between them.

At the top, No1 and three-time champion Novak Djokovic, lined up to play his rightful seed, No5 Tomas Berdych. Great news for the tournament and for Djokovic, not such good news for the big Czech: He had lost 24 of his 26 matches against Djokovic, and all three this year without winning a set.

Also in the top half of the draw, No4 seed and Canadian hope, Milos Raonic, lately from the finals of Wimbledon and bristling with confidence, would take on No10 seed and a man realising his considerable talent with last week’s Washington title, Gael Monfils.

Then, in the other half of the draw, No3 Kei Nishikori, a semi-finalist last year, took on Grigor Dimitrov, also a former semi-finalist.

And rounding out the bottom half, No2 seed Stan Wawrinka took on a man who had beaten him in four of their last five matches, Kevin Anderson.

What made this a special line-up, considering that four of the current top 10 were missing from the original draw, was that every one of the eight quarter-finalists, including the unseeded Anderson and Dimitrov, were former top-10 players.

Dimitrov, at his lowest ranking since the start of 2013 at 40, had suffered wayward form and confidence since peaking at No8 less than two years ago with three titles and a semi-final run at Wimbledon. Indeed he was on a six-match losing streak until making the third round of Wimbledon last month.

Anderson’s season had been even more frustrating. After breaking the top 10 following a strong run during last year’s US Open series—including the quarters of the US Open itself—he was forced to withdraw from eight tournaments due to left knee and right shoulder injuries, and had ankle surgery in March.

He therefore arrived here at No34 in the rankings, his lowest in well over three years, but had battled back from a set down against No12 seed Bernard Tomic. He now hoped to halt a run of six quarter-final losses by reaching his first semi-final at the tournament.

Unfortunately for Anderson, Wawrinka was looking confident, calm, and every inch the No2 seed since arriving in Canada. He had clearly used his lean grass season—one win in two tournaments—to regroup, practise and bounce back with some intense tennis. For he played doubles here too, with Dimitrov, to get more court time, and it was showing.

The Swiss broke Anderson, who owns one of the best serves in tennis, in the very first game, and did so again in the third. Not content with holding for a 4-1 lead, Wawrinka broke again for the set, 6-1, in little more than half an hour.

Anderson beat a hasty exit for a few minutes, and when he returned, he had clearly determined to up the aggression from his end. He was let down, as he had been in the first set, by hitting the mark with his first serve on barely half his deliveries. But he found enough to hold off two break points on his opening service game, despite a time warning at 15-40 down.

Anderson let out a first ‘C’mon’, and came in to attack Wawrinka’s serve in the third game. It earned him a break chance but he could not convert, and he would not get another opportunity.

Wawrinka looked supremely relaxed, allowing himself the occasional clenched fist to his box, and he was quick to take advantage of break points in the eighth game. With just 73 minutes on the clock, he served it out, 6-3, to reach his first Canadian semi-final.

The ‘laid-back Stan’ continued into press, and no wonder: He was very happy with his tennis:

“Yeah, it was a really good match, I think. Showed me that I was ready, aggressive, moving really well. It’s one of the best matches of the year I played… I was calm. Serving really good. Mixing a lot, reading the game well, good in defence, found a way to come back and attack.”

He would leave it to his coach, he said, to follow the next match, already on court, between Dimitrov and Nishikori.

However, Wawrinka may have ended up watching the third set himself, as their battle extended beyond two hours. Nishikori broke twice in the first set, in the fifth and ninth games, to take the set, 6-3.

Dimitrov seemed to find better range and intensity in the second, breaking straight away as his backhands found their groove. He came under pressure on his own serve, through three break points, but finally held, 2-0, and he resisted another break point in the fourth game. The Japanese man seemed unable to respond, though attempted to attack the net more, but with his first serve letting him down, Dimitrov broke again for the set, 6-3.

But the Bulgarian would rue still more missed break points in the second game of the decider. Nishikori found a second wind, and slotted a brilliant backhand winner to break in the third. Another break in the fifth, and the game was up: Nishikori became clinical in his placement, and served it out, 6-2.

So in the end, the seedings held true: Wawrinka heads into his first Rogers Cup semi in 10 attempts, and his first Masters semi of the year, where he will take on Nishikori for the fifth time, and the first time in 18 months.

And if the Swiss needs still more confidence, it comes in their head-to-head: He has won three of the four, including a straight-sets victory at the Australian Open last year.

Federer’s right-hand-man Luthi has no doubts: ‘It’s incredible how positive and inspired he is’