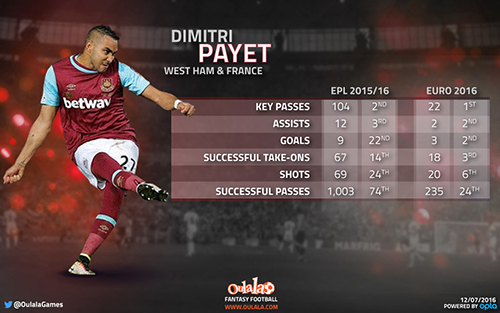 Dimitri Payet is one of the most in-vogue players in Europe after an impressive first season in the Premier League with West Ham United.

The France international enhanced his reputation on the world stage with a sensational winner in les Bleus’s 2-1 victory over Romania in their Euro 2016 opener in Paris just over a month ago.

In fact, the Hammers man was named the European championship player of the tournament to leave West Ham supporters worried about a potential big-money offer this summer.

In an attempt to dissuade any bids from European giants, West Ham co-owner David Gold has valued Payet at an eye-watering £50m. Oulala have taken a look at the midfielder’s stats from Euro 2016 to evaluate whether the hefty price tag is justified.

Payet made the most key passes at the European championship. In the Premier League, the French playmaker finished second in the same category with 104 key passes.

In terms of assists, the West Ham star placed third in the Premier League with 12 but was Euro 2016’s second-highest goal creator with two.

His three goals at the major tournament were only surpassed by Antoine Griezmann. Payet managed to net nine times in his first season in the Premier League which amounts to a pretty good return.

Given these convincing Oulala stats, perhaps West Ham owner Gold is justified in placing a £50m price tag on his prized asset.