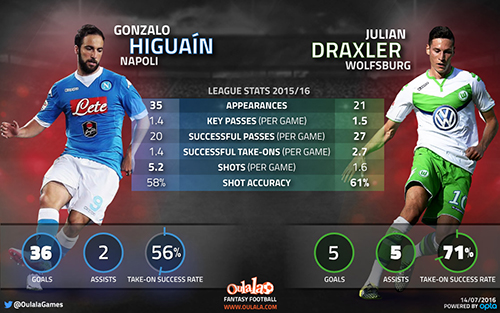 Arsene Wenger has already made two signings this summer but the Arsenal supporters are still waiting for the Gunners manager to sign a world-class centre-forward.

There have been relentless calls from ex-players and supporters for Wenger to finally make the plunge and spend big on a new striker capable of firing the north London side to the Premier League title.

Arsenal have been linked with a host of different players in the summer so far, but Wolfsburg forward Julian Draxler and Napoli striker Gonzalo Higuain are two names that keep popping up.

Now, Oulala have taken an in-depth look at the pair’s stats to examine whether Arsenal should spend big on Draxler or Higuain this summer.

Unsurprisingly, the Napoli forward averaged 5.2 shots per game, which is significantly more than Draxler’s 1.4 attempts on goal per game. However, Draxler has a narrowly greater shot accuracy of 61 per cent to 58 per cent.

Draxler proved more adept at taking on opponents, too. The World Cup winner had 2.7 successful take-ons per game as opposed to Higuain’s 1.4. This translates to a 71 per cent take-on success rate.

So Oulala’s stats highlight the different elements both Draxler and Higuain could bring to the Arsenal side but will Wenger open his cheque book again this summer to finally land a quality striker?