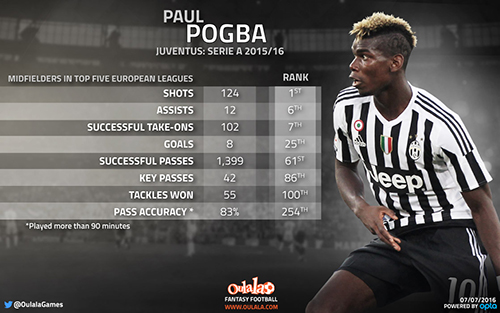 Paul Pogba has only enhanced his reputation in Europe with his performances for France at Euro 2016 this summer.

According to a report published by Sky Sports, Manchester United chief executive Ed Woodward has entered into negotiations with Serie A champions Juventus over a potential world-record £100m deal to sign Pogba.

Fantasy Football game Oulala have taken a look at how the 100m-rated French star ranked alongside every other midfielder in the top five European leagues last season to discover whether he really is worth the monster price-tag.

While the 23-year-old is top of the charts in terms of shots on goal, Pogba is a disappointing 25th when it comes to goals scored. Oulala’s stats suggest that the French midfielder has some work to do when it comes to the accuracy of his shooting.

Pogba’s 12 assists in Serie A last term puts the former United midfielder in sixth place in the European rankings, but his 1,399 successful passes leaves the Juventus midfielder in a lowly 61st place in Oulala’s stats-based charts. Notably, his pass accuracy of 83 per cent was just the 254th best in Europe.

The defensive side of his game needs work too based on tackles won. Pogba won 55 challenges last term – 100th in Europe.

Oulala’s stats perhaps provide Jose Mourinho, Woodward and United with something to think about ahead of any potential deal in the summer transfer window.

Photo: Tottenham striker soaks up the sun ahead of new Premier League season