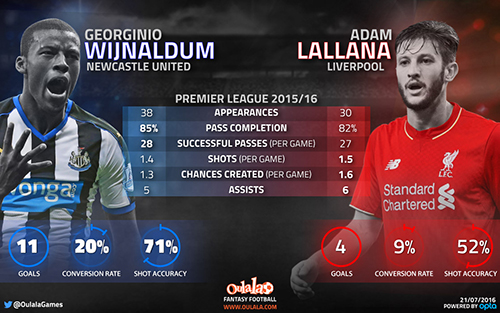 Is Adam Lallana's time up at Liverpool? Photo: Oulala

Liverpool’s transfer offer for the 25-year-old playmaker was deemed adequate by the Magpies as Reds manager Jurgen Klopp completed his seventh summer signing to continue the revamping of his squad.

After Liverpool’s signing of Wijnaldum was completed on Friday, Oulala have taken a look at the Dutchman’s stats against Adam Lallana to see how the pair compared in the Premier League last season.

The Dutch midfielder made 38 top-flight appearances in his first season in England after a £11.4m move to St James’s Park from PSV Eindhoven last summer.

Wijnaldum netted an impressive 11 times for the Magpies in comparison to Lallana’s disappointing return of four goals. Furthermore, the Dutch playmaker finished with a superior conversation rate (20 per cent to nine per cent) and shot accuracy (71 per cent to 50 per cent).

The former Newcastle midfielder proved a better passer of the ball than the England international last term.

Wijnaldum made an average of 28 successful passes per game, while Lallana finished narrowly behind on 27. The Dutchman also finished with a slightly higher pass completion rate of 85 per cent – three per cent more than Lallana.

With Wijnaldum winning six of the nine categories, though, Lallana could well be facing an uncertain future at Anfield following the Dutchman’s arrival at Anfield this summer.