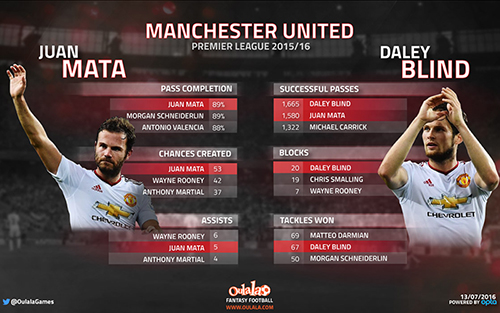 Do Juan Mata and Daley Blind have a future at Man United? Photo: Oulala

Jose Mourinho has been giving his Manchester United squad a facelift in recent weeks ahead of the new Premier League season.

According to a report in The Daily Record, the new United manager is looking to sell Daley Blind, Juan Mata, Marcos Rojo and Bastian Schweinsteiger before the start of the season.

However, Oulala’s stats suggest that Mourinho would be foolish to get rid of Blind and Mata after the United pair were two of Louis van Gaal’s most-consistent players last term.

The Spanish midfielder completed more passes than any of his team-mates in the 2015/16 season ahead of Morgan Schneiderlin and Antonio Valencia.

Blind, meanwhile, made 1,665 successful passes in the 2015/16 Premier League campaign, beating the likes of Mata and Michael Carrick.

The Netherlands international made 20 blocks alongside Chris Smalling (19) as the ex-Ajax star helped United keep one of the best defensive records in the division.

Examining Oulala’s insightful stats, United manager Mourinho might want to consider giving Blind and Mata a chance to prove their value to their new boss.