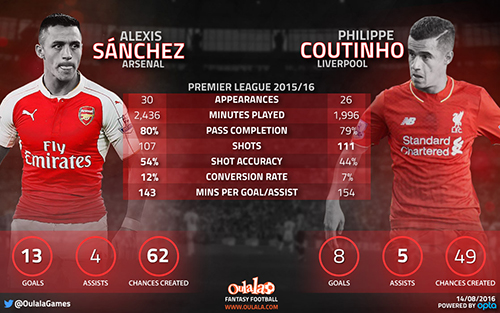 Who will come out on top on Sunday? Alexis Sanchez or Philippe Coutinho Photo: Oulala

Arsenal and Liverpool will meet in the headline act of the Premier League’s opening weekend at The Emirates on Sunday afternoon.

The two sides met in August in 2015 but the game finished in a stalemate as Arsenal goalkeeper Petr Cech managed to deny Christian Benteke and his Liverpool team-mates.

However, Oulala’s stats suggest that Philippe Coutinho and Alexis Sanchez will be the decisive players in north London on Sunday and the Chile forward appears to have the edge over the Brazilian midfielder.

Sanchez made four more appearances than Coutinho in the 2015/16 Premier League season which amounted to a total of 2,436 top-flight minutes – not bad considering he was injured for a portion of the campaign.

The South American scored 13 times and made four assists, which is significantly more than Coutinho’s return of five goals and five assists.

While Liverpool’s number 10 created more goals for his team-mates, Sanchez completed 80 per cent of his passes, while Coutinho managed 79 per cent pass completion.

The Arsenal star also scored a goal or made an assist every 143 minutes in the Premier League, while Coutinho averaged 154 top-flight minutes.

In fact, the only category which sees the Liverpool midfielder come out on top is shots: Coutinho had 111 in comparison to Sanchez’s 107.

With the stage set for Sunday’s mouth-watering game, will Sanchez come out on top again?