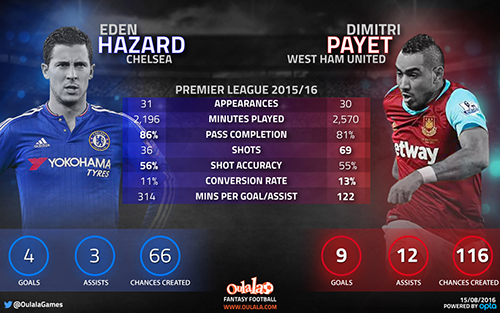 Eden Hazard and Dimitri Payet will go head-to-head at Stamford Bridge on Monday night as Chelsea face West Ham in their first London derby of the new season.

France midfielder Payet was one of the standout players in the 2015/16 Premier League season following his move to West Ham from Marseille last summer.

Hazard, on the other hand, has a point to prove after a dreadful campaign just months after winning the 2015 PFA player of the year award.

Fantasy Football game Oulala have examined the pair’s stats ahead of Monday’s showdown in west London.

While Hazard played one more game than Payet last season, the French playmaker racked up more top-flight minutes – 2,570 to 2,196.

The Belgium international may have finished with a 86 per cent pass completion, Hazard made just four assists in comparison to Payet’s impressive tally of 12.

Payet created more chances than Hazard too – 116 to 66 – which explains why the Hammers man made a goal or an assist every 122 minutes.