Photo: Eden Hazard all smiles with Chelsea duo ahead of trip back to London 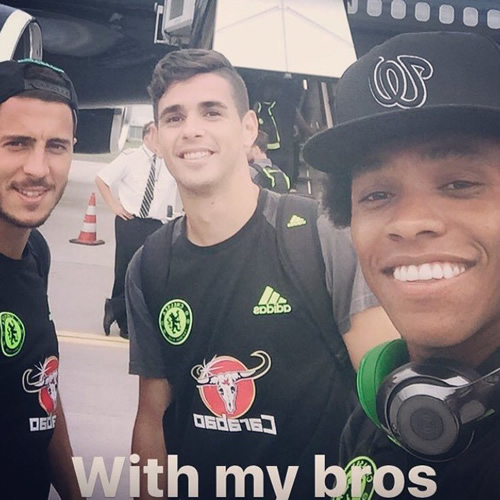 Eden Hazard looked to be in good spirits as he posed for a picture with Willian and Oscar as Chelsea prepared to head back to London on Sunday evening.

Hazard, Oscar, Diego Costa and Pedro Rodridguez all scored as Chelsea ended their pre-season campaign with an impressive 4-2 win over Werder Bremen in Germany.

The Blues concluded their pre-season preparations in style and will now turn their attentions towards their Premier League opener against West Ham United at Stamford Bridge next Monday night.

And the trio of Hazard, Oscar and Willian seemed to be upbeat as they posed for a snap before boarding their flight back to the English capital.

Chelsea are preparing for their first season under new manager Antonio Conte at Chelsea following his appointment as Jose Mourinho’s permanent successor earlier in the year.