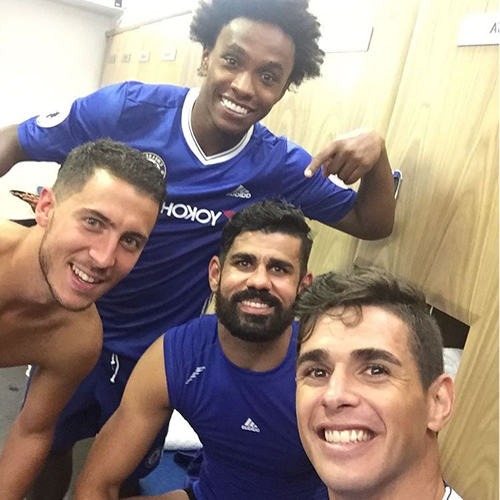 Eden Hazard looked to be in good spirits as he celebrated Chelsea’s 2-1 win over West Ham United at Stamford Bridge in the dressing room with his team-mates.

The Belgian playmaker scored the opener from the penalty spot early in the second half at Stamford Bridge to send the Blues on their way to victory.

West Ham equalised but Diego Costa had the final say when he slotted home the winner in the final minute.

The win ensured that the Blues made a positive start to life under new manager Antonio Conte in front of their home fans.

And the 25-year-old Hazard was clearly thrilled to be back on the scoresheet and help Chelsea secure the three points in their Premier League opener.

Chelsea are aiming to bounce back from their disastrous campaign last season when they ended up 10th in the table and out of all cup competitions.

Their next game is a trip to Watford at the weekend.

Graeme Souness: This is only thing missing from Liverpool star’s game