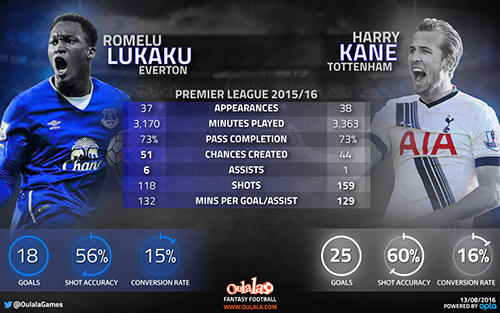 Everton and Tottenham Hotspur meet in what is one of the more intriguing games on Saturday as the Premier League returns for the 2016/17 season.

Ronald Koeman has replaced Roberto Martinez as the Toffees manager and the former Southampton boss will be hopeful that Romelu Lukaku can have another prolific campaign.

Tottenham, meanwhile, will be hoping that Harry Kane can brush aside a disappointing Euro 2016 campaign and surpass his tally of 26 Premier League goals from last term.

Fantasy Football game Oulala have taken an in-depth look at Lukaku and Kane ahead of Saturday’s showdown at Goodison Park.

The England centre-forward played more games and minutes than the Belgian forward last season which undoubtedly played a part in his superior goal tally.

His shot accuracy was a slightly superior 60 per cent in comparison to Lukaku’s 55 per cent and Kane boasts a marginally higher conversion rate of 16 per cent.

The Everton striker was more creative than Kane, though, creating 55 chances and making six assists. The England star, on the other hand, will be hoping to supply his team-mates more often with 44 chances created and just one assist.