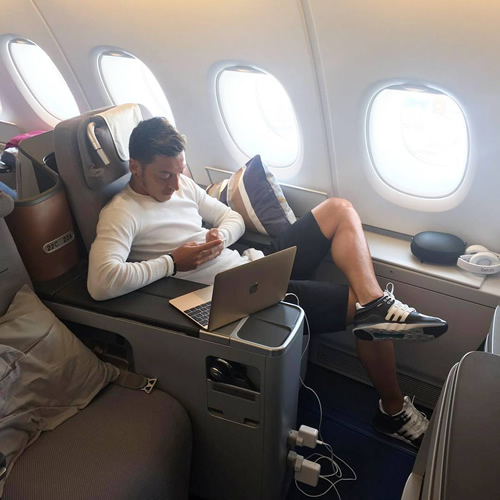 Mesut Ozil looked to be in good shape as he put his feet up during his flight back to London as the playmaker turns his attentions towards pre-season training with Arsenal.

The Germany international has been granted an extended holiday after his involvement in Euro 2016 with his country in France this summer.

Ozil made an appearance to greet his team-mates and meet fans during Arsenal’s 3-1 win over Chivas on Sunday night in their most recent pre-season friendly clash.

However, the 27-year-old is now getting ready to get back down to business as he bids to work on his fitness levels ahead of the new Premier League season.

Ozil posted the picture above of himself taking a private jet back to the UK on his personal Instagram account on Wednesday morning and wrote: “London calling! ✈ #BackToWork 😉”

Ozil was unable to help Arsenal end their long wait for the Premier League title last season as they ended up second in the table and 10 points behind surprise champions Leicester City.