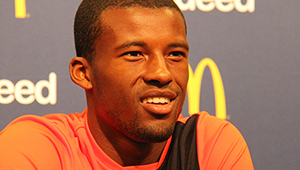 Georginio Wijnaldum has confidently declared that he can score a minimum of 10 Premier League goals in his first season at Anfield.

The Netherlands international completed a £25m move to Liverpool from Newcastle United last month after the midfielder was unable to help the Magpies avoid relegation to the Championship.

Wijnaldum did, however, manage to score 11 times in 38 Premier League games in his first season in the English top flight after the Dutch star swapped PSV Eindhoven for Newcastle last summer.

The 25-year-old made his first appearance for Liverpool at the weekend as Jurgen Klopp’s side were 2-0 winners against AC Milan thanks to goals from Divock Origi and Roberto Firmino.

While Wijanldum failed to find the back of the net against Milan, the summer signing is confident that he can contribute 10 goals to Liverpool’s tally in the Premier League this term.

“The manager wants more goals but I also put pressure on myself to score, I do that everywhere,” Wijnaldum is quoted as saying by Sky Sports.

“I did it at Feyenoord, I did it at PSV and I did it at Newcastle. I’m greedy to score and will do the same this season.

“I think a player with my quality has to at least get a minimum of 10 a season. That’s what I have always said.

“Sometimes you reach more, sometimes less, like last season I got 11. But because I create so many chances I have to score at least ten.”

The Reds lost 1-0 to Chelsea in their opening game of the International Champions Cup last week.