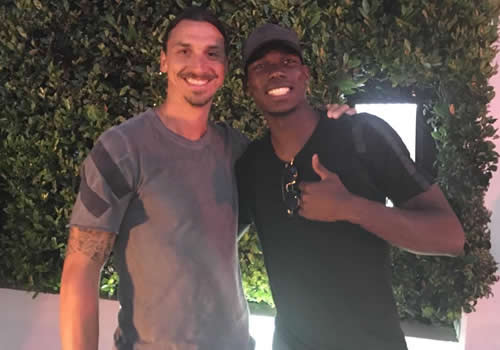 Paul Pogba has taken to social media to send an upbeat message to Zlatan Ibrahimovic as the France midfielder gets used to life at Manchester United for a second time.

The 23-year-old finally completed his much-anticipated transfer back to Old Trafford in the early hours of Tuesday morning after the relentless speculation linking him with a return to United.

Pogba has been training with his Manchester United team-mates at Carrington over the last few days as he bids to regain his fitness as soon as possible ahead of the new Premier League season.

Ibrahimovic and Pogba spent some time together during their holidays in the United States earlier in the summer.

Pogba shared the picture above on the app and wrote: “THOR. Throwback to Los Angeles with Thooor @iamzlatanibrahimovic @manchesterunited #firstneverfollows #TBT”

It remains to be seen whether Pogba will be deemed fit enough to feature for United in their Premier League opener at Bournemouth on Sunday.