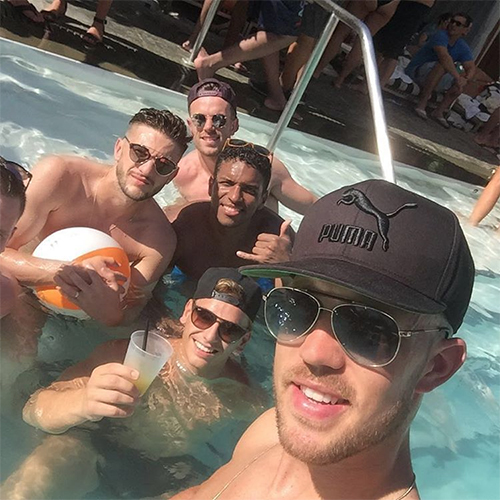 Adam Lallana and Jordan Henderson have been working hard during pre-season training in United States but the Liverpool duo appeared to find some spare time for a dip in the pool with some friends.

The Reds played four games during their pre-season tour of America as Jurgen Klopp put his players through a rigorous series of sessions and games ahead of his first full Premier League season in charge.

Liverpool started their tour with a 1-0 defeat by bitter Premier League rivals Chelsea in Pasadena before a 2-0 win against Serie A outfit AC Milan at Levi Stadium in Santa Clara.

However, the Merseyside outfit went on to lose 2-1 to Roma in their final game Stateside in St Louis to end their tour on a sour note ahead of their return to England.

But Lallana managed to join his Liverpool captain Henderson for a dip in the pool in a more relaxed enviroment after the midfielder posted a throwback snap on his Instagram page on Thursday.

Lallana wrote the following caption on the photo-sharing app:

“TBT Summer with the lads 😎”

The Liverpool midfielder joined the 18-time English champions in a £25m deal from Southampton in 2014.