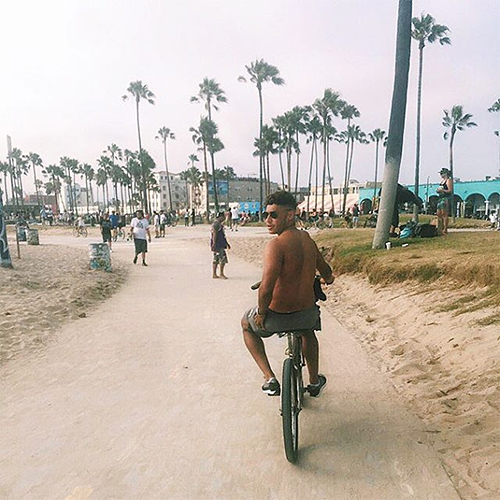 Alex Oxlade-Chamberlain will perhaps leave the United States with his reputation enhanced the most of any of his Arsenal team-mates after two impressive performances.

The England midfielder was unable to find the net in an otherwise eye-catching display as Arsenal were 2-1 winners against MLS All-Stars at Avaya Stadium in San Jose last week.

Oxlade-Chamberlain earned praise from his manager Arsene Wenger for his performance against the best of Major League Soccer as Joel Campbell and Chuba Akpom found the net on Thursday evening.

However, the 22-year-old winger did manage to score on Sunday night as the north London side were 3-1 winners against Mexican outfit Chivas Guadalajara at StubHub Center in Los Angeles.

And Oxlade-Chamberlain opted to go for a bike ride along Long Beach on Tuesday morning as the Arsenal star made sure to warm down following his pre-season heroics.

The England international posted the above photo on his Instagram page ahead of Arsenal’s next game against Viking in Norway on Friday night.

The Gunners finished in second place in the Premier League table last season and 10 points behind champions Leicester City.