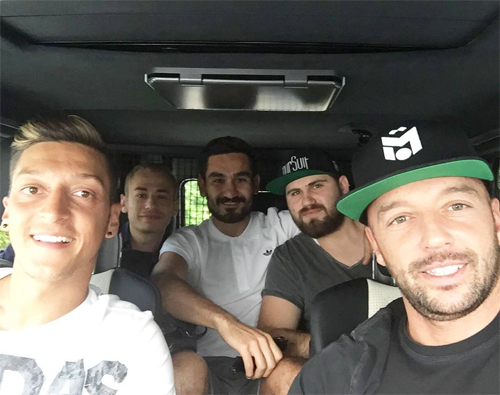 Mesut Ozil was all smiles with new Manchester City signing Ilkay Gundogan as the German pair hung out on Thursday afternoon.

The Arsenal midfielder missed the north London side’s 4-3 defeat by title rivals Liverpool at the Emirates Stadium in their Premier League opener on Sunday afternoon.

Ozil could make his return to action on Saturday evening as the Gunners make the trip to Premier League champions Leicester City at King Power Stadium.

The Germany international has been enjoying an extended break after helping Joachim Low’s side reach the European championship semi-final this summer.

However, Ozil was spending time with his compatriot Gundogan on Thursday afternoon as the pair caught up following the midfielder’s move to City from Bundesliga side Borussia Dortmund.

Gundogan posted the above photo on his Instagram page and wrote the following caption:

“✌Afternoon excursion with my boys ..”

The Gunners managed to beat the Foxes home and away last season, including Danny Welbeck’s memorable winner in a 2-1 win at Emirates Stadium.