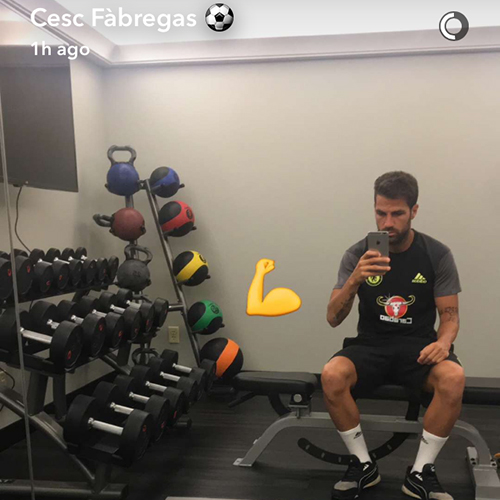 Cesc Fabregas was looking to impress Chelsea manager Antonio Conte as the midfielder hit the gym at their hotel base in United States.

The Spain international was sent off on Wednesday night after Fabregas was punished for a late tackle on Ragnar Klavan during Chelsea’s 1-0 victory over Liverpool at Levi Stadium in Pasadena.

Fabregas, who moved to the west London side in a £27m deal from Barcelona in July 2014, returned to Chelsea first-team training earlier this month after ending his summer holidays with his young family.

The 29-year-old midfielder won’t feature in Chelsea’s next International Champions Cup game against Real Madrid due to his sending off for his poor challenge on Liverpool signing Klavan.

And Fabregas opted to head to the gym to keep in shape ahead of the 2016/17 Premier League season and perhaps kill some time as his Chelsea team-mate prepared to face Madrid.

The World Cup winner posted the above photo on his Snapchat account (@cescky4) on Saturday morning.

Chelsea will start their first season under Antonio Conte against West Ham United on 15 August.