Cesc Fabregas looks thrilled to be heading to Chelsea training 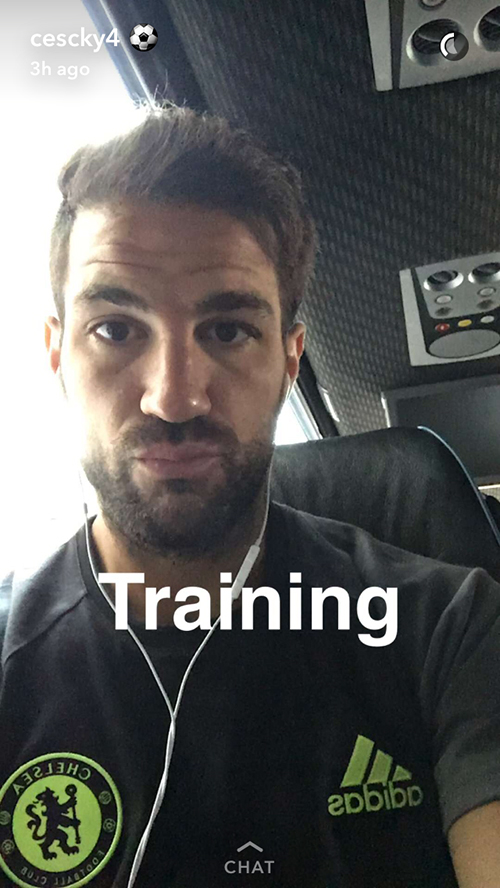 The Spain international returned to the Blues set-up last month after an extended break following a demanding Euro 2016 campaigh which saw la Roja lose 2-0 to Antonio Conte’s Italy side in the last 16.

Fabregas got to sample Conte’s philosophy in that European championship clash before the former Juventus defender took over the reins at Stamford Bridge following his appointment earlier this year.

However, the 29-year-old doesn’t appear to have any problem embracing Conte’s demanding methods with Fabregas is lean shape ahead of the 2016/17 Premier League campaign.

And Fabregas posted the above selfie on his Snapchat account (@cescky4) as the Chelsea midfielder headed for another training session.

Chelsea were 1-0 winners against bitter Premier League rivals Liverpool in their first International Champions Cup fixture before a 3-2 defeat by Real Madrid at the weekend.

The Blues will take on Serie A giants AC Milan in their next game in Minneapolis before heading to Germany to face Werder Bremen ahead of the new Premier League season.

Chelsea will begin their domestic campaign with a clash against London rivals West Ham United on 15 August.

Riyad Mahrez to reject Arsenal and stay at Leicester – report