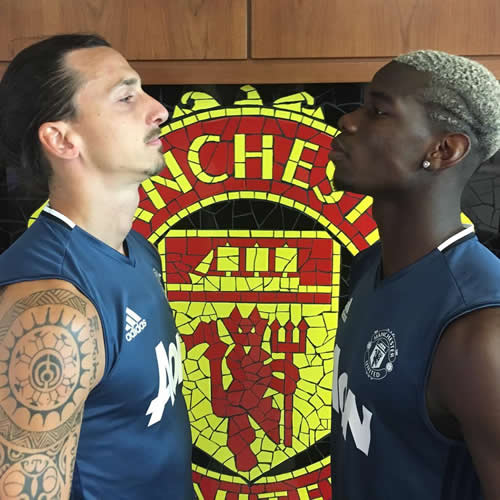 Zlatan Ibrahimovic has taken to social media to claim that he is solely responsible for bringing Paul Pogba back to Manchester United this summer.

The France midfielder signed a five-year contract with the Red Devils on Tuesday after being relentlessly linked with a move back to the club throughout the summer months.

Pogba is now back at United and has been getting used to life at the Premier League club for a second time after training with his team-mates at Carrington this week.

The 23-year-old will definitely not feature during United’s Premier League opener at Bournemouth on Sunday afternoon because he is suspended.

Ibrahimovic is also a new arrival at United after having signed for the Red Devils on a free transfer earlier in the summer following his departure from Paris Saint-Germain.

And the Swedish striker was quick to claim that he is the man responsible for Pogba’s world-record move back to the club as he posed for a picture with him after training.

Ibrahimovic posted the picture above on his personal Instagram account on Saturday morning and wrote: “Finally my shirt brought him back. @paulpogba”