Manchester United manager Jose Mourinho has something on his mind 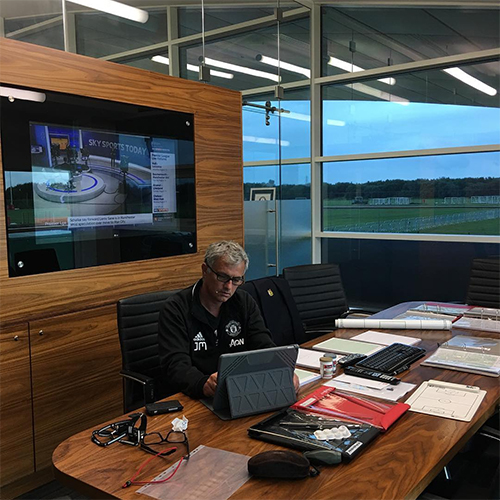 Jose Mourinho offered Manchester United supporters a fascinating insight into his office set-up at Carrington training ground as the new manager worked hard on formulating a plan for success on Monday afternoon.

The 53-year-old was named as Louis van Gaal’s successor at the start of the summer after the Dutch coach led United to a disappointing fifth-placed finish in his second season in charge.

Mourinho has wasted no time strengthening his squad after the Portuguese manager signed Eric Bailly in a £30m deal from La Liga side Villarreal before Zlatan Ibrahimovic swapped Paris Saint-Germain for United earlier this month.

Armenia international and Borussia Dortmund midfielder Henrikh Mkhitaryan has since completed a £30m switch to Old Trafford, too.

And United supporters will be hoping that Mourinho is working hard on some more potential signings after the Red Devils boss posted the above photo on his Instagram page on Monday afternoon.

Mourinho posted a particularly cryptic caption which suggested something was on the United manager’s mind.

United were 5-2 winners against Galatasaray in their latest pre-season friendly in Sweden as Ibrahimovic opened his account for the Red Devils.

Photo: Fabregas and Hazard all smiles with Chelsea team-mates at baseball game