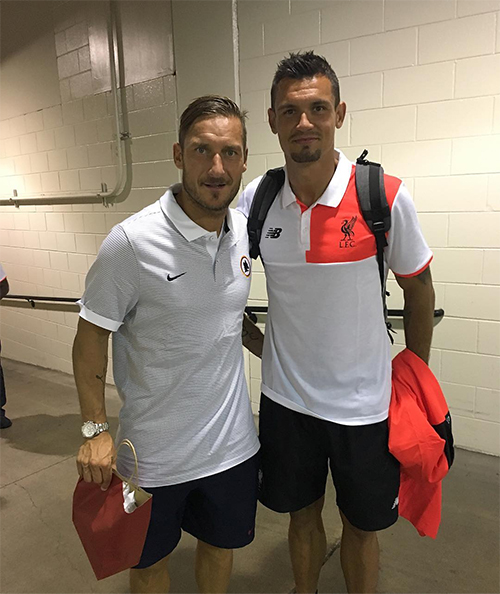 Dejan Lovren went from footballer to fan on Monday night as the Liverpool defender posed for a photo with Roma captain Francesco Totti following a 2-1 defeat by the Italian side in St Louis.

The Croatia international was unable to help the Reds avoid a disappointing loss to the Serie A side which meant their tour of the United States ended on a disappointing note.

Liverpool started their pre-season campaign Stateside with a 1-0 defeat by bitter Premier League rivals Chelsea before a 2-0 victory over Serie A giants AC Milan at Levi’s Stadium on Saturday.

However, Lovren did end the tour on a high from a personal point of view as the Liverpool centre-half managed to get a photo with Italy and Roma legend Totti after the game.

Lovren posted the above photo on his Instagram page without a caption, which probably isn’t necessary given Totti’s status as one of the titans of the game.

Liverpool will start the 2016/17 Premier League campaign with an away trip to Arsenal at the Emirates Stadium on 14 August.