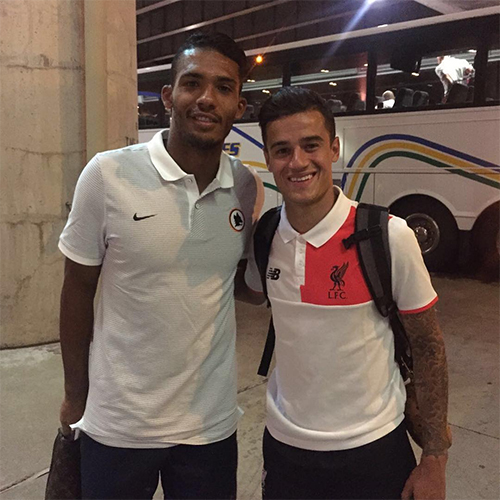 Philippe Coutinho was all smiles with his fellow Brazilian Juan Jesus on Monday night despite Liverpool’s 2-1 defeat by Roma in St Louis.

Jurgen Klopp’s side ended their tour of the United States on a sour note after goals from former Chelsea midfielder Mohamed Salah and ex-Manchester City striker Edin Dzeko sealed a slender win for the Serie A outfit.

Liverpool return to the United Kingdom with a record of one win and two defeats Stateside after a 2-0 victory over AC Milan was sandwiched between disappointing losses to Chelsea and Roma.

However, playmaker Coutinho was in high spirits despite the result as he posed for a photo with his fellow Brazilian Jesus in St Louis after the pre-season fixture.

Coutinho posted the above photo on his Instagram page and wrote the following caption:

“Good to see you Bro. Wish you all the best.”

The South American midfielder moved to Liverpool in an £8.5m deal from Serie A giants Inter Milan under Klopp’s predecessor Brendan Rodgers in January 2013.

Liverpool will start the 2016/17 Premier League season with a trip to their bitter rivals Arsenal on 14 August.