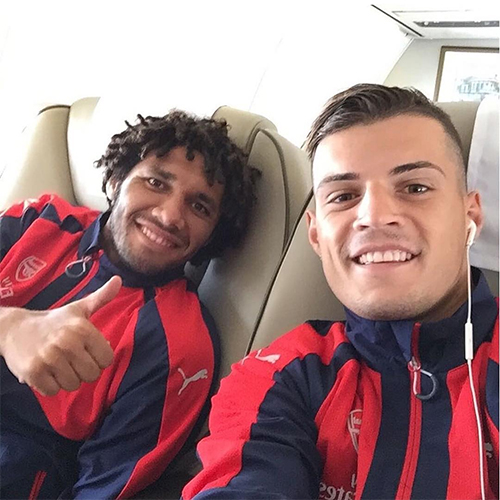 Mohamed Elneny and Granit Xhaka have only just got back from United States but the Arsenal duo looked excited to be heading to the north of Europe for an extension of their pre-season tour.

The north London side will face Norwegian side Viking FK in Stavanger before the Gunners will take on Pep Guardiola’s Manchester City side in Gothenburg in their final warm-up game.

Xhaka was the first of Arsene Wenger’s three summer signings after the midfielder completed a £33m move to the north London side from Borussia Monchengladbach ahead of this summer’s European championship.

The Swiss midfielder made his first Arsenal appearance as a half-time substitute in their 2-1 victory over MLS All-Stars at Avaya Stadium before the 23-year-old started his first Gunners game in a 3-1 victory over Mexican side Chivas Guadalajara at the weekend.

Elneny posted the above photo on his Instagram page alongside Xhaka and wrote the following caption:

“Off to 🇳🇴 and 🇸🇪 #preseason @granitxhaka 👍”

The Egypt international moved to Arsenal in a £7m deal from Swiss champions Basel in the January transfer window.

Elneny was voted Arsenal’s player of the month for April and May after an impressive start to his Gunners career.

Arsenal have made enquiries about these two transfer targets – report