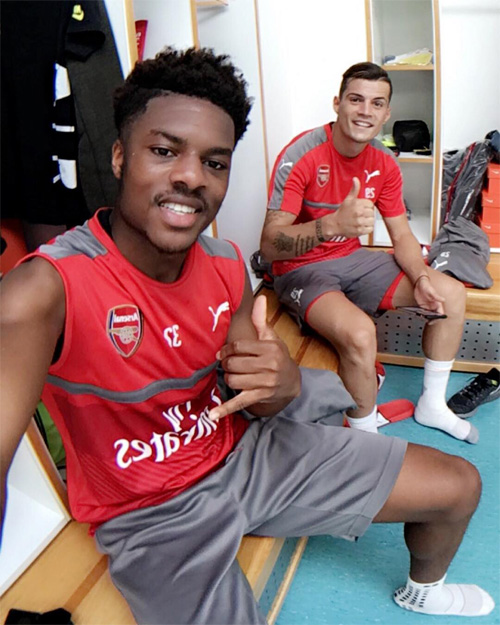 Granit Xhaka was in an upbeat mood on Tuesday despite Arsenal’s poor start to the season as the midfielder posed for a selfie with Chuba Akpom.

The Gunners suffered a 4-3 defeat by Liverpool at the Emirates Stadium on Sunday afternoon after goals from Philippe Coutinho, Adam Lallana and Sadio Mane.

Xhaka made his Premier League debut in the second half of their opener as the Switzerland international wasted no time picking up his first booking in England.

The 23-year-old moved to Arsenal in a £33m deal from Bundesliga side Borussia Monchengladbach at the start of the summer transfer window ahead of Euro 2016.

And Arsenal striker Akpom, who scored two goals during their pre-season tour of United States, posted the above selfie with Xhaka in the dressing room.

Akpom wrote the above caption on his Instagram page and wrote the following caption:

Xhaka scored three goals in 36 appearances in all competitions for Monchengladbach last term.

Paul Parker: This is what concerns me about new Man United signing