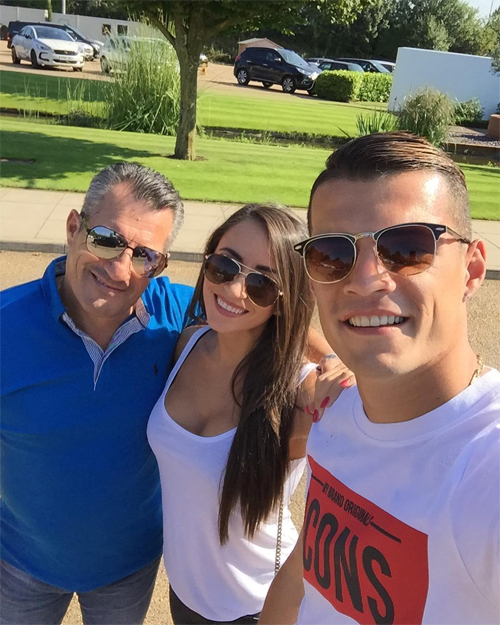 Granit Xhaka was all smiles with his beautiful fiancee and his father as the Arsenal midfielder made the most of some downtime on Wednesday afternoon.

The Switzerland international endured a forgettable debut at the Emirates Stadium on Sunday afternoon as Arsenal lost 4-3 to Liverpool.

Xhaka was a second-half substitute in the second half and the midfielder wasted no time picking up a booking but couldn’t inspire a late comeback.

The Swiss midfielder completed a £33m transfer to the north London side from Bundesliga outfit Borussia Monchengladbach at the start of the summer.

Xhaka will be hoping to make a better impact against Leicester City at the King Power Stadium on Saturday evening.

But the Arsenal signing wasn’t thinking about his first Premier League away day on Wednesday evening as the midfielder relaxed with his father and fiancee.

Xhaka posted the above photo on his Instagram page and wrote the following caption:

Arsenal haven’t won the Premier League title since 2004 but Arsene Wenger’s side did finish in the runners-up spot last term.

Arsenal still in the hunt for Germany defender – report