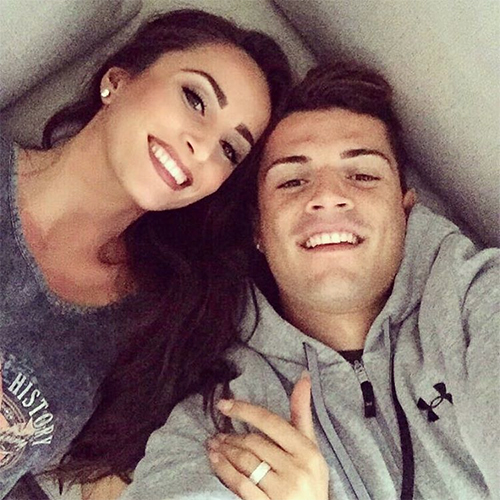 Granit Xhaka couldn’t disguise his delight to be back in his fiancee’s arms after coming home from Arsenal’s tour of USA.

The Switzerland international travelled to California with Arsene Wenger’s squad following his £33m move to the Emirates Stadium from Bundesliga side Borussia Monchengladbach earlier this summer.

Xhaka made his first appearance against MLS All-Stars as a half-time substitute as Arsene Wenger’s side were 2-1 winners against Didier Drogba, Kaka and company at Avaya Stadium on Thursday night.

However, Xhaka was pleased to be back from the United States tour on Monday and spend time with his girlfriend ahead of Arsenal’s pre-season friendly against Viking in Norway on Friday.

Xhaka posted the above selfie on his Instagram page and wrote the following caption:

“After the good week with the team in USA, back at home again with my 👶🏻♥️”

Arsenal will start the 2016/17 Premier League campaign with a clash against Liverpool at the Emirates Stadium on 14 August.