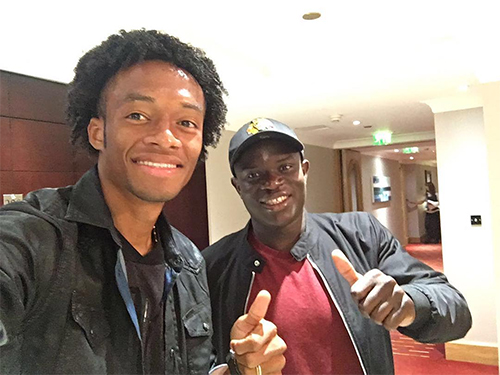 Juan Cuadrado and N’Golo Kante were all smiles despite the language barrier between the Chelsea duo.

The France international completed a £30m move to the west London side from Premier League champions Leicester City last month after helping the Foxes win the title in May.

Cuadrado, meanwhile, has returned from a season-long loan at Serie A champions Juventus to battle for a place under new Chelsea manager Antonio Conte, who took over at Stamford Bridge earlier this summer.

The Colombia international was one of Jose Mourinho’s signings after the Blues completed a big-money deal with Serie A outfit Fiorentina for the playmaker in January 2015.

And Cuadrado and Kante appear to have struck up an unlikely friendship in the Chelsea squad as the pair posed for a selfie on Friday after enjoying dinner together.

Cuadrado posted the above photo on his Instagram page and wrote the following caption:

The west London side have also signed Belgium striker Michy Batshuayi in a £34m deal from Ligue 1 side Marseille this summer.