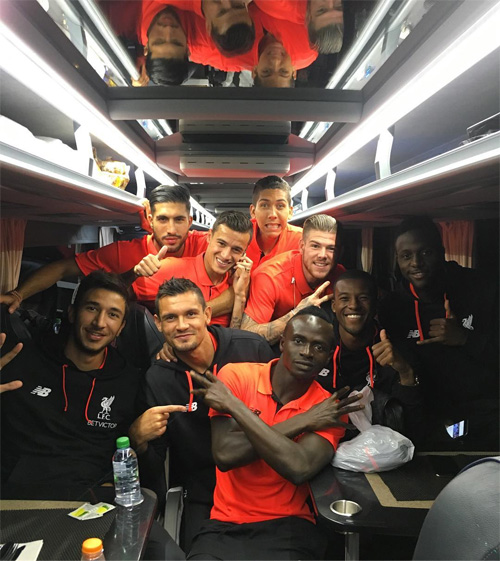 Georiginio Wijnaldum and Sadio Mane posed for a triumphant team photo with Philippe Coutinho and some other members of the Liverpool squad following Sunday’s 4-3 victory over Arsenal.

Jurgen Klopp’s side made a conspicious start to their Premier League opener after Theo Walcott missed a first-half penalty before the England striker broke the deadlock moments later.

However, Brazil international Coutinho levelled on the stroke of half-time with a brilliant free-kick to offer Liverpool a positive after an otherwise disappointing 45 minutes.

Adam Lallana edged the Reds into a second-half advantage before Coutinho and Mane completed a dominant 10-minute spell for the visitors at The Emirates.

Arsenal duo Alex Oxlade-Chamberlain and Calum Chambers managed to reduce Liverpool’s lead to one goal but Klopp’s hung on for three points.

And Liverpool centre-half Lovren posted the above selfie on his Instagram page with new team-mates Mane, Wijnaldum and more after the Reds’s seven-goal thriller.

The Reds will travel to promoted side Burnley in their next Premier League game at Turf Moor next Saturday.