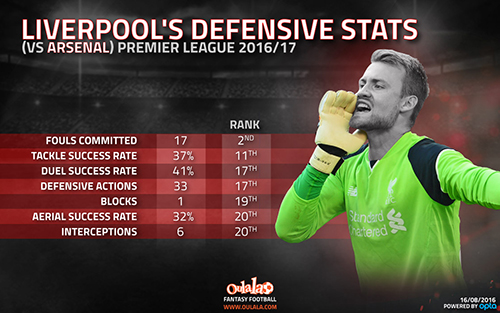 Liverpool managed to make a winning start to their Premier League campaign at The Emirates but the Reds’s defence was unconvincing in a 4-3 victory over Arsenal.

In particular, Spanish left-back Alberto Moreno came in for criticism for another erratic performance, while there has been long-term doubts hanging over Liverpool goalkeeper Simon Mignolet.

While the Reds have scored more goals than any other Premier League side this year, Oulala’s stats highlight that manager Jurgen Klopp has work to do at the back if Liverpool are to be successful under the charismatic German.

Liverpool won just 32 per cent of their aerial challenges in north London, which was the lowest percentage of any Premier League side at the weekend. The Reds also finished at the bottom of the statistical pile in terms of interceptions.

Klopp’s side managed just one block during the 4-3 victory, which put them in 19th place in that department following the opening weekend.

Their duel success rate of 41 per cent was the fourth worst in the Premier League, while their tackle success rate placed them at 11th.

Finally, Liverpool committed the second-most fouls of any top-flight team in England at the Emirates Stadium in what was a poor defensive performance from Klopp’s side in north London.

Photo: New Man United signing all smiles with Jesse Lingard over dinner ahead of debut