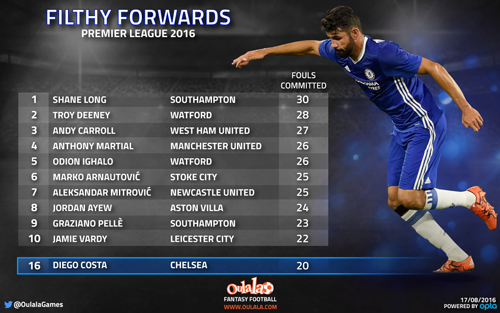 Diego Costa hit the headlines again this week after he ruffled a few feathers before the Chelsea striker scored a late winner in a 2-1 victory over West Ham United.

The Blues forward picked up a first-half booking for dissent before the 27-year-old walked a disciplinary tightrope for the remainder of the London derby.

Costa was a tad fortunate to avoid a sending off after the Spanish star caught West Ham goalkeeper Adrian in the second half at Stamford Bridge.

However, Fantasy Football game Oulala have taken a look at the Premier League’s dirtiest forwards – and surprisingly Costa comes in a lowly 16th.

Examining which strikers have committed the most fouls this year, Southampton’s Shane Long has been penalised 30 times for an indiscretion.

However, Manchester United supporters will be surprised to learn that Anthony Martial secures fourth spot after he has been penalised 26 times.

As for Costa, the Chelsea man doesn’t even make the top 10 as his 20 fouls earns the controversial striker 16th spot.