We take a look ahead to the Melbourne Cup, set to be held on Tuesday 1 November 2016 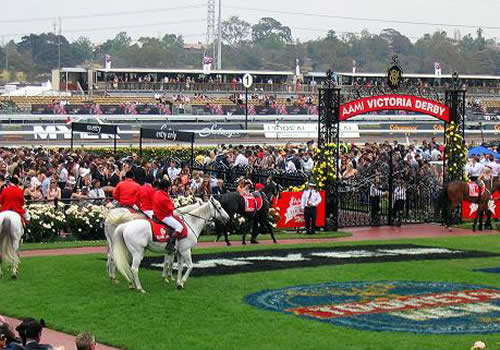 The Melbourne Cup is Australia’s richest Thoroughbred flat race and is amongst the world’s most prestigious horse racing events.

Held annually at 3pm on the first Tuesday of November each year at Flemington racecourse in Melbourne, Australia, the race is contested over two-miles (3200 metres) and has a prize pool in excess of $6.2 million.

The race is open to horses aged three years and older and routinely attracts the very best performers from across Australia and Europe to do battle in the world’s richest two-mile handicap. Flemington’s long, sweeping left-handed track ensures sporting entertainment of the finest quality as a stellar field of 20 horses and trainers vie for a share of the mouth-watering purse on offer.

First contested in 1861, the Melbourne Cup has developed into one of the world’s grandest racing occasions, both on the track and off of it. The unparalleled competition on the turf is supported by week-long celebrations of sport, entertainment and fashion as over 100,000 people flock to the racecourse each November to witness Australia’s richest race. From public parades to race-day fashion shows, the Melbourne Cup is an occasion that caters for every person across the world.

Throughout the history of horse racing, the Melbourne Cup has long stood as a race which produces much anticipation and excitement. Whether it be Makybe Diva’s three consecutive victories from 2003 until 2005 or Phar Lap in 1930, the great two-mile race has been host to many of Australian sport’s most memorable moments. This was enhanced 12 months ago when 100/1 chance Prince Of Penzance etched his name into racing history when producing a fantastic display under female jockey Michelle Payne to become the first lady-ridden horse to win the Melbourne Cup.

This year’s renewal of ‘the race that stops a nation’ is shaping up to possess even more excitement. A number of leading profiles from Australia, Britain and Ireland have all been earmarked towards a potential tilt at the Melbourne Cup later this year, including reigning Royal Ascot Gold Cup winner Order Of St George for Ireland’s training maestro Aidan O’Brien. The four-year-old colt is the current 10/1 antepost favourite for the race and will boast superb claims should he be sent Down Under later in 2016.

The 2016 Melbourne Cup racing tips list rivals to Ballydoyle as Prince Of Penzance and Protectionist amongst the main rivals of a stellar list. The latter is sure to represent good claims after finding his form once again in Germany this year. Powerful owners Godolphin are also represented strongly with 16 entries across a wide variety of different trainers.

Last year’s fourth and fifth placed horses Trip To Paris and Big Orange are engaged once more following tremendous efforts in 2015, whereas champion Irish jumps trainer, second with Max Dynamite last year, will bid to go one better in November with Clondaw Warrior likely to be his representative.

A total of 12 horses are nominated by local Australian trainers and the group is headlined by the Lee and Anthony Freedman-trained Our Ivanhowe. The six-year-old finished four-lengths behind Prince Of Penzance in last year’s contest, but seems to have taken his form to a new level this season in winning the Group One Doomben Cup in May. He heads to Flemington in November quietly fancied by many inside the Australian racing community.

Such a contingent of entries gives this year’s renewal of the Melbourne Cup the potential to be one of the most thrilling in recent years as both the class of horse and traditional social celebrations continue to excel year on year.