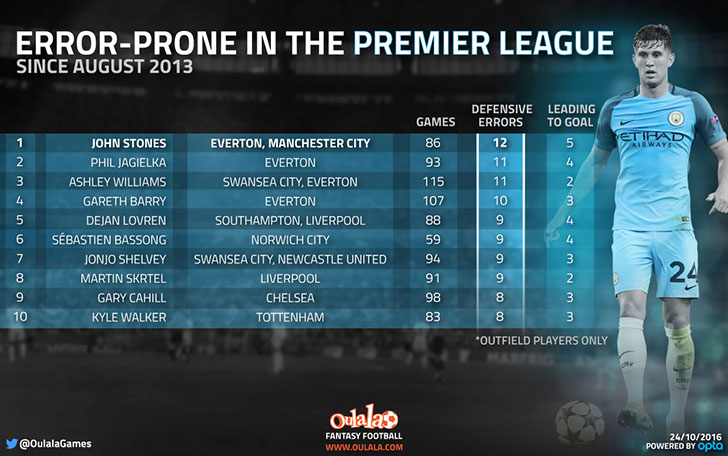 Gary Cahill and Dejan Lovren are among the ten most-error prone players in the Premier League, according to Oulala.

While the Chelsea and Liverpool defenders helped their respective employers secure Premier League victories at the weekend, Cahill and Lovren both feature on Oulala’s list of erratic Premier League players.

At number 10 is Tottenham right-back Kyle Walker. The England international has made eight defensive errors leading to three goals in 83 Premier League games for the north London side.

Liverpool supporters won’t be surprised to see former defender Martin Skrtel on the list given his own goal record. The Slovakia international, who moved to Fenerbahce in the summer, made nine defensive errors leading to two goals in 91 games between 2013 and 2016.

The next high profile entry is Skrtel’s former team-mate Lovren. The Liverpool centre-half has made nine mistakes leading to four goals in 88 games since his move to the Premier League three-and-a-half years ago.

However, it is Manchester City’s £50m summer signing John Stones who is the most-error prone Premier League player. The England international’s poor back pass led to Nathan Redmond’s opener in the Citizens’ 1-1 draw with Southampton at the weekend.

And Stones has made 12 defensive errors leading to five goals in 86 games for Everton and Manchester City.