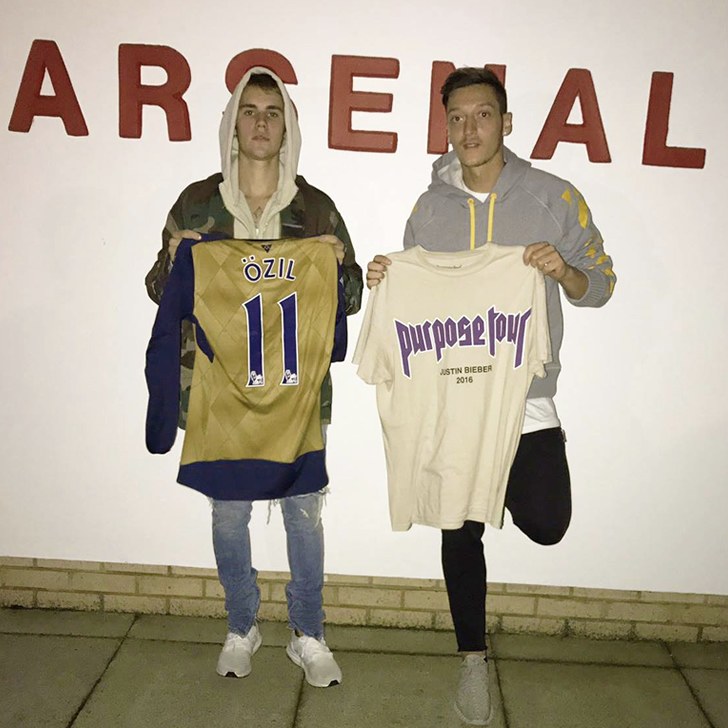 Mesut Ozil looked to be in good spirits as he posed for a picture with Justin Beiber after showing the singer around Arsenal’s training ground on Monday night.

Both Ozil and Alex Oxlade-Chamberlain are clearly fans of Bieber and were in attendance to see him perform at his Purpose tour in London this week.

Ozil posted the picture above on his personal Facebook page on Tuesday afternoon and wrote: “Shirt swap 🔄 with this guy. 😉 Nice to see you, Justin Bieber. #justin #bieber #purposetour”

Meanwhile, Oxlade-Chamberlain shared the photo below on Instagram and wrote the caption: “Really enjoyed the show on Wednesday and great to take Justin around the training ground last night 🙌🏽”

Ozil and Oxlade-Chamberlain will both be hoping to be involved when Arsenal return to Champions League action on Wednesday night with a home clash against Ludogorets at The Emirates.

Ozil scored Arsenal’s third goal as the Gunners kept up their fine form in the Premier League on Saturday afternoon with a 3-2 win over Swansea City at The Emirates.

The north London side are now second in the table and level on points with leaders Manchester City after eight games.