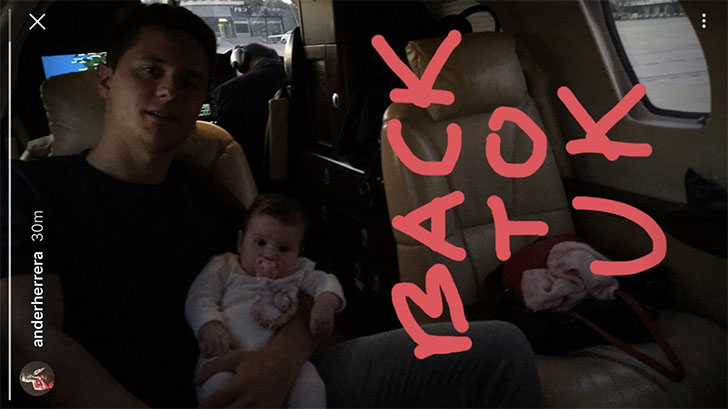 Ander Herrera headed back to England with his daughter on Monday night after a memorable week for the Manchester United midfielder.

The 27-year-old received his first call-up to the Spain national team last week following a string of injuries within la Roja’s squad.

Herrera didn’t get to make his first appearance in the colours of Spain’s senior team as Julen Lopetegui’s side drew 1-1 with Italy before a 2-0 win against Albania on Sunday night.

The former Athletic Bilbao midfielder will now have to switch his focus back to the Premier League ahead of Monday night’s trip to bitter rivals Liverpool at Anfield.

And Herrera posted the above photo on his Instagram story on Monday night as the United midfielder prepared to head back to England head of the return of the Premier League.

Herrera’s caption read: “Back to the UK”

The Spanish midfielder has enjoyed a run in Jose Mourinho’s first-team in recent weeks as he continues to partner world-record signing Paul Pogba in the heart of the United team.

Photo: Kenedy all smiles with in-form Chelsea striker ahead of Leicester clash