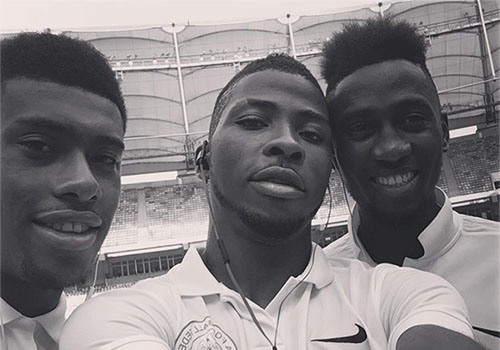 Alex Iwobi was all smiles with Manchester City striker Kelechi Iheanacho ahead of Nigeria’s 2-0 win against a local team ahead of their next World Cup qualifier against Zambia.

The Arsenal midfielder has been in excellent form for Arsene Wenger’s side in recent weeks and he scooped the man of the match award for his performance in a 3-0 win against Chelsea at the Emirates Stadium last month.

The 20-year-old has made three assists in five Premier League games so far and the Gunners reside in third place in the table behind Iheanacho’s City and north London rivals Tottenham Hotspur.

The Nigerian striker has scored two goals and has made three assists in five Premier League starts despite being behind Argentina international Sergio Aguero in the pecking order at The Etihad.

And Iheanacho appeared to be in good form with Iwobi as the Premier League pair posed for a selfie with another Nigerian team-mate ahead of their 3-0 win in a friendly ahead of their trip to Zambia on Sunday night.

Iwobi posted the above photo and wrote on his Instagram page:

“Matchday Selfie Against The Local Side Today 🇳🇬 #SuperEagles”

Arsenal host Swansea City at The Emirates in their next Premier League game.